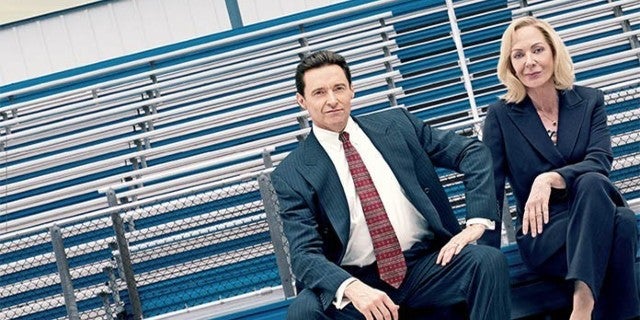 Thanks to the coronavirus pandemic, more people than ever are finding themselves staying home and tuning into television while they do their part to help stem the spread of COVID-19 and in just a few weeks they’ll have something new to watch. Hugh Jackman took to Twitter on Tuesday to share the poster for his upcoming HBO film Bad Education, reminding fans that the movie debuts on Saturday, April 25th as he encourages everyone to stay home and watch.

Inspired by real-life events, Bad Education stars Jackman as Frank Tassone and Allison Janney as Pamela Gluckin, a Long Island school superintendent and his assistant who are credited with bringing the school district to a level where it is among the best in the nation. However, all of it begins to come undone when a student reporter discovers a long-running embezzlement scheme that threatens to destroy it all and prompts Frank to move to cover it all up by any means necessary. The film, which also stars Ray Romano, Geraldine Viswanathan and Alex Wolff, premiered at the Toronto International Film Festival in September 2019.

The poster for the upcoming film isn’t the only thing that Jackman’s been sharing to help fans get through the pandemic, either. He also shared as short video today revealing that he’s utilizing the stairs of his building to stay in shape while staying at home. His post came in response to a similar post from professional tennis player Roger Federer who had tagged Jackmen and a number of others, including Tom Brady, Trevor Noah, and Bill Gates, to share their quarantine fitness routines.

“Unfortunately, don’t have tennis courts at our place in New York City but we have something you guys don’t have, which is… a lot of this,” an out of breath Jackman said in a video. “Fifteen floors baby.”

Jackman has also previously shared his gratitude for first responders in New York City and also posted a video serenading fans with the song “You Will Be Found” from the musical Dear Evan Hansen.

“I think the words are pertinent for now, and always actually,” he said before his performance. You can check that video out here.

Will you be checking out Jackman’s film Bad Education? Let us know in the comments below.