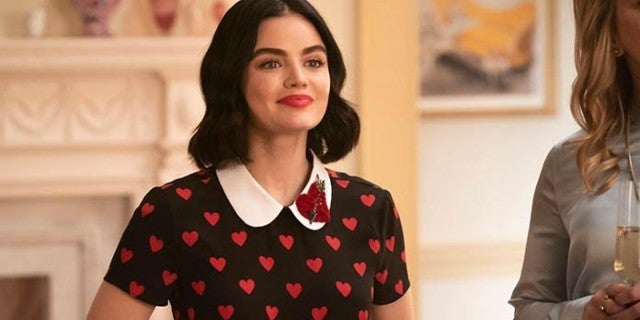 The CW has released a preview for “Chapter Nine: Wishin’ & a Hopin,'” the episode of Katy Keene set to air on Thursday, April 16. The series’ season thus far has seen Katy (Lucy Hale) and her fellow dreamers deal with a number of personal and professional challenges that threaten to get in the way of their big dreams. In this upcoming episode, however, those struggles take on new forms when Katy ends up tested to her breaking point and Josie (Ashleigh Murray) is faced with a new version of her old group, The Pussycats.

Dealing with a new Pussycats is something that is likely going to cause some major tension. Photos from the episode have already revealed some tense moments between not just Josie and Alex (Lucien Laviscount) but Alex and his own father as well. As fans of Riverdale may recall, The Pussycats was Josie’s original band consisting of Josie along with Valerie (Hayley Law) and Melody (Asha Bromfield), though after being featured during the show’s first season, Valerie and Melody were slowly phased out of the show. By the time Josie left Riverdale, The Pussycats hadn’t been seen on screen for some time.

As for Katy, she finds herself struggling with her fashion apprenticeship while Pepper (Julia Chan) finds herself in an online feud that could ruin all of her plans. You can check out the official episode synopsis for “Chapter Nine: Wishin’ & a Hopin'” below.

TO GOOD TO BE TRUE – Katy (Lucy Hale) struggles with find her place with her new position and loses her confidence and turns to Gloria (Katherine LaNasa) who gives her good advice. Alex (Lucien Laviscount) wants to put together The Pussycats again, but what his dad envisions and what Josie (Ashleigh Murray) envisions for the group are two different things leaving Alex to make a tough choice. Jorge (Jonny Beauchamp) is happy that he is able to bring his current boyfriend and a budding friendship with an ex together, but things become a little messy. Meanwhile, Pepper (Julia Chan) is in an online feud that could ruin everything for her, and she is stunned when she learns who it is. Camille Hyde and Zane Holtz also star. Pamela Romanowsky directed the episode written by Mia Katherine Iverson.