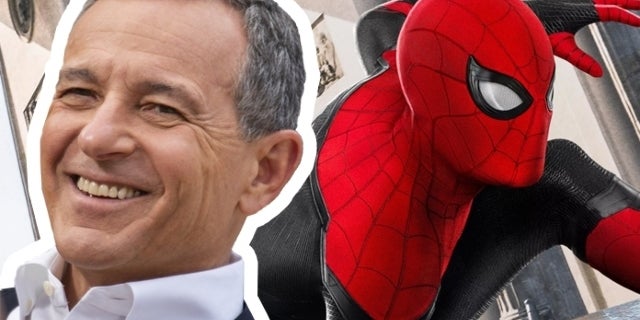 Last summer, Tom Holland helped save the Spider-Man deal, and now Disney CEO Bob Iger would like a little something in return. Nothing huge, he just tweeted that the Wall-Crawling actor owed him a beer for helping salvage the negotiations between Disney and Sony. The story famously goes that while the Internet was having a literal meltdown in the days and hours after the news broke, Holland took matters into his own hands. The result made fans around the world breathe a sigh of relief as Spider-Man would get to have that final solo adventure in the Marvel Cinematic Universe. Each company is now building for their future and it was called a “win-win-win” by both sets of executives earlier today. So, Iger understandably wants that drink to celebrate.

Iger wrote on Twitter, “Last night’s premiere of @Pixar latest film, #Onward, gave me a chance to see @MarvelStudios friends–#ChrisPratt and #TomHolland! Tom owes me a “pint” for saving @SpiderMan!”

The pint thing is a bit of a joke about pub trivia master Tom Holland. It was actually a moment outside of a bar that could have ended up saving everyone’s friendly neighborhood Spider-Man. All of it has to be read to get the full scope of how the exchange went down.

“Miraculously. He was. We had an event called D23, and Tom was there because he’s a voice in [Pixar’s Onward]. He said something on stage, and it was clear that fans wanted Tom back as Spider-Man, made by Marvel and our Marvel production team,” Iger began. “And after D23, Tom reached out to folks who work for me and said, ‘Can I please have Bob’s e-mail address or phone number?’ Of course, I’m very protected, so they were very careful. I said ‘Sure, have him contact me,’ and he did.”

“We spoke. And he basically made a — he cried on the phone, no, not really. But it was clear that he cared so much. And actually, we care about him,” Iger elaborated. “I felt for him, and it was clear that the fans wanted this to happen. So after I got off the phone with him, I made a couple of phone calls to our team at Disney Studios, and then I decided to call the head of Sony, and I said ‘We have to figure out a way to get this done, for Tom and for the fans.’ And we did. That’s how it happened… Sometimes, when companies are negotiating with each other, they kinda forget that there are other folks out there.

So, Spidey is back in the MCU and Onward is in theaters March 6th. No word on that pint yet though.