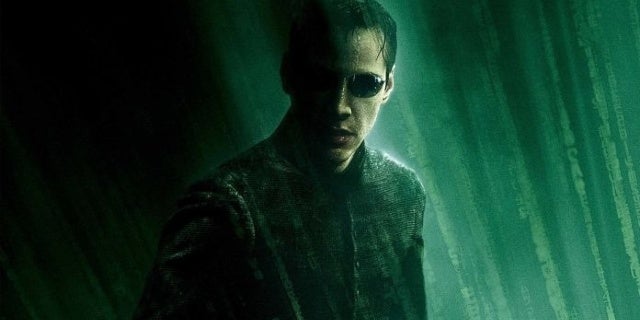 Production continues on the upcoming fourth Matrix movie from Warner Bros. and Village Roadshow Pictures and another look at the set has arrived online. Keanu Reeves, reprising his role of Neo once again, is back and sporting a very different look from his character in the original films. Earlier this week photos appeared online of Reeves with actress Carrie-Anne Moss on set but the latest video raises an interesting question about the film’s plot. We likely won’t know much about The Matrix 4‘s plot for a few more months but this videos from the set might offer some clues Check out the video from NBC Bay Area below along with our analysis.

As you can see in the video, Reeves is wandering an empty street at night while light rain and mist shower down. This image is interesting for a few reasons, notably because there are only two instances of rainy conditions in the actual Matrix throughout The Matrix movies: When the tracker bug is removed from Neo’s body by Trinity in the first film, and the final confrontation with Agent Smith in the third film. So what does this mean for the fourth movie that such a notable visual motif will take place?

Other videos and set photos from the new film have shown action scenes taking place at night, which wouldn’t be completely out of the ordinary compared to the original Matrix movies as some major action beats take place at night, but none with these types of weather conditions. This raises the question, what version of The Matrix are we going to be seeing in the new film? Is this a version that existed BEFORE the events of the original The Matrix trilogy (and is therefore a different simulation than we saw in those movies) or is this a version of the Matrix that is set after those movies?

Another #KeanuReeves sighting in San Francisco! The movie star is in the Bay Area filming #Matrix4. https://t.co/fiuAyUz5Qi pic.twitter.com/Rm5WEOqbj2

Neo wandering the streets could be after the events of the fight with Agent Smith as The Matrix is about to be reborn again; or perhaps we’re seeing Reeves’ character in a Back to the Future Part II situation, acting as the focal point of the past and making sure all of the necessary components of history that lead to the original The Matrix trilogy happen as needed. We know from the other films in The Matrix series that Neo was one of many “The Ones” that existed within the simulation, and since newcomer Yahya Abdul-Mateen II is rumored to be playing a young Morpheus in the film it stands to reason that some time-shenanigans are afoot. There’s also the set video that seems to allude to a recreation of the “jump” scene from the first movie.

What do you think? Got any theories for The Matrix 4 based on the set videos and photos? Sound off in the comments below or reach out to me on Twitter at @TheSpencerPerry.