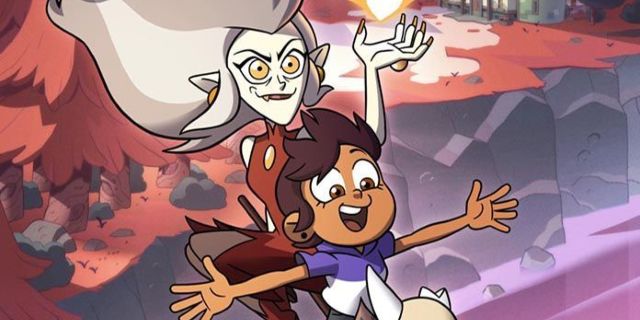 Conservative Christian activist group One Million Moms has once again turned its attention to the world of entertainment, this time taking aim at the Disney Channel over animated series The Owl House. The group is calling the children’s series “demonic” and is demanding that Disney immediately cancel the show they claim is taking “yet another danger step into the darkness”. The group’s petition making this demand currently sits at just under 16,000 signatures telling Disney that they “do not agree with the demonic nature of The Owl House nor its theme of witchcraft.”

The Owl House first premiered on the Disney Channel back in January and follows the story of Luz Noceda, a teenage girl who accidentally stumbles through a portal to another world — the Boiling Isles — instead of going to her intended destination, Reality Check Camp. On the Boiling Isles, Luz befriends the rebellious witch Eda the Owl Lady and, despite having no magical abilities, Luz is determined to become a witch by serving as Eda’s apprentice. at the Owl House. The series was renewed for a second season in November 2019, well ahead of its debut.

While the description of The Owl House may sound intriguing or even charming, One Million Moms has a different take.

“In The Owl House, Disney introduces kids to a world of demons, witches, and sorcery while inundating their young minds with secular worldviews that reflect the current culture,” the One Million Moms web site describes. “The show makes light of hell and the dangers of the demonic realm. Even the previews and commercials include such content that makes it difficult for families who watch Disney Channel to avoid the evil content completely.”

The campaign also notes some of Disney’s other “evil” related programming, such as Maleficent and Star vs. The Forces of Evil and goes on to cite the Christian Broadcasting Network (CBN) as also being critical of The Owl House for trying to “portray witchcraft as a positive tool to fight evil.”

This is far from the first time One Million Moms has taken issue with a Disney property. In 2015 the group, which is a division of the non-profit evangelical Christian group American Family Association, targeted The Muppets, going after the ABC sitcom for what it described as “sexually charged jokes” and, more recently, the group attempted to start a boycott against Toy Story 4. The group took issue with the film’s alleged LGBTQ+ undertones, though their boycott didn’t work considering that the film was not only successful at the box office but even went on to win an Academy Award.

And it’s also not just entertainment that One Million Moms has been going after lately. Last month, the group slammed Burger King for the use of what it called the “d-word” — it’s “damn” for anyone curious — a commercial about the plant-based Impossible Whopper.