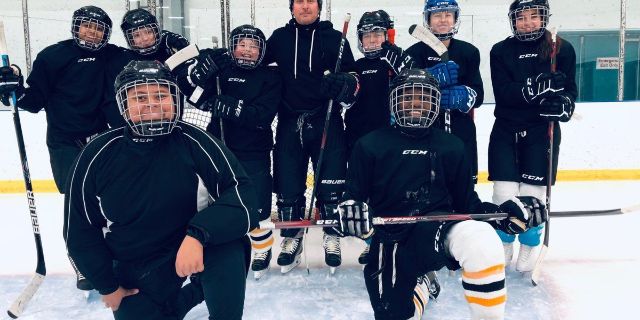 It seems like only yesterday we got our first official confirmation that Emilio Estevez was returning to the ice as Coach Bombay for a new Generation of Mighty Ducks on Disney+…but today fans got their first official look at the new team and the old coach — and yes, the internet is exactly as excited as you would think. Estevez, who has spent a lot more time as a director and producer in the last decade or so than he has in front of the camera, looks right at home back in his old role, and the nostalgia is real for ’90s kids seeing him lace his skates back up.

This of course comes on the heels of an announcement that ’80s icon Rick Moranis would return to the Honey, I Shrunk the Kids franchise this year as well. Between the two, we’re having a hard time figuring out what “retired” actor Disney will go after next.

You can check out the images below, via Disney+

NO. CHILL. 🚨❄🏒 #EmilioEstevez is BACK as Gordon Bombay! Check out this photo from production on The Mighty Ducks, an Original Series coming soon to #DisneyPlus. pic.twitter.com/SSVEDUuO4w

“It was an easy decision to bring back the Quack Attack with a modern and fresh twist,” said Agnes Chu, senior vice president, Content, Disney+. “For a generation, ‘The Mighty Ducks’ stood for teamwork, friendship, and heart and we’re excited to see the Ducks fly together once again and bring the franchise to new audiences around the world. We are thrilled to have Emilio Estevez reprising his iconic role.”

Finally, below you will find the full confirmed cast list for The Mighty Ducks, along with the official synopsis for the show:

In present day Minnesota, the Mighty Ducks have evolved from scrappy underdogs to an ultra-competitive, powerhouse youth hockey team. After 12-year-old Evan (Noon) is unceremoniously cut from the Ducks, he and his mom Alex (Graham) set out to build their own ragtag team of misfits to challenge the cutthroat, win-at-all-costs culture of competitive youth sports. With the help of Gordon Bombay (Estevez), they discover the joys of playing just for the love of the game.”

The Mighty Ducks will stream its 10-episode season later this year.