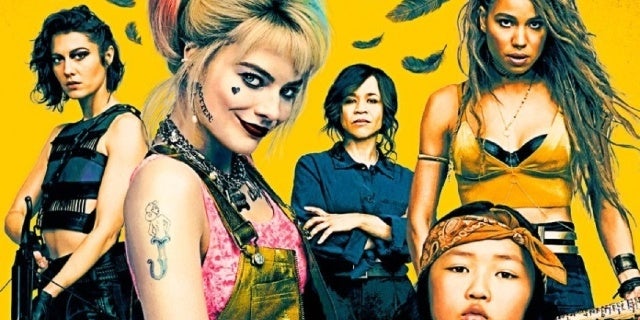 We’re exactly two weeks away from the first showings of Birds of Prey (and the Fantabulous Emancipation of One Harley Quinn), the first female-led ensemble film to enter the mainstream superhero space. DC Extended Universe fans are already hyped for the film for a pretty wide array of reasons, including the big-screen debut of some of DC’s coolest heroines. To celebrate, IMAX has released a new poster for the upcoming film, which shows Huntress (Mary Elizabeth Winstead), Harley Quinn (Margot Robbie), Renee Montoya (Rosie Perez), Black Canary (Jurnee Smollett-Bell), and Cassandra Cain (Ella Jay Basco) posing for the camera.

Check out the #IMAX exclusive artwork for @BirdsofPreyWB! Prepare to immerse yourself into Harley Quinn’s Gotham and experience the action in IMAX theatres, starting 2/7. Advanced tickets available soon at https://t.co/llxWliaS1M pic.twitter.com/opar37ofxo

Birds of Prey will follow an unexpected team-up between its heroines, after they all get in the crosshairs of the vicious crime lord, Black Mask ( Ewan McGregor). While fans will have to head to their local multiplex – or IMAX theater – to see how it all unfolds, it sounds like fans can expect an epic, feminist thrill ride.

“It was exciting, everything about it was so cool, like the costumes,” Winstead explained in a previous interview.. “And [director] Cathy [Yan], really being at the helm of it, and really making these decisions that she thought were cool, as opposed to going ‘Well, we’ve got to appeal to this person, we’ve got to appeal to that person.’ It was really like she had the reins. And Margot was super involved in a collaborative way, but it was all just like ‘What do we think is cool?’ Not like ‘But are guys going to think this is sexy?’ We didn’t have any of those questions. It was just like ‘What do we think is cool?’”

What do you think of the newest Birds of Prey poster? Share your thoughts with us in the comments below!