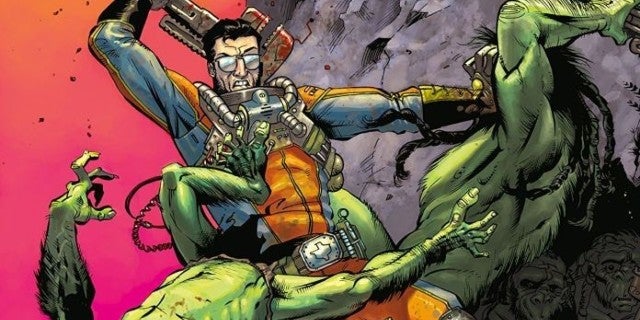 A veritable Justice League of comic book fans are getting together for another comic related project as The Hollywood Reporter brings word that Seth Rogen, Matt Tolmach and David F. Sandberg will executive produce an adaptation of Fear Agent. Sony Pictures Television will produce the series which has landed at Amazon Prime Video after a reported competitive bidding war that included HBO Max, Peacock, and TNT. Screenwriter Mattson Tomlin will write the pilot for the adaptation of the Rick Remender and Tony Moore comic series.

First launched in 2005, the official description for the TV adaptation reads: “Interstellar invaders. Time travel. Clones of clones of clones, and lots of whiskey. Whether he’s battling the scourge of space, going back in time to stop the alien invasion that changed Earth forever, or winning his ex-wife back, there’s nothing that Heath Huston won’t do to try to right the wrongs and gets his family back. He is, after all, the last Fear Agent.”

For the creative talent involved in the series this marks yet another comic adaptation for literally all of them. Rogen and his producing partner Evan Goldberg both produced the TV adaptations of Preacher and The Boys plus The Green Hornet and the in-development Invincible, while David F. Sandberg made the leap to comics last year with Warner Bros.’ Shazam! Matt Tolmach has been involved with Sony’s Spider-Man franchise for almost a decade now, producing The Amazing Spider-Man and its sequel as well as Venom and the upcoming Morbius. As for Mattson Tomlin he recently penned the script for a little movie called The Batman, now filming in London.

This marks the latest forray into television for comic scribe Rick Remender, whose comic series Deadly Class was adapted for television at SYFY last year with Remender functioning as its showrunner. Unfortunately the series was cancelled after its first season premiered and was unable to find a second life.

Though both Fear Agent and Deadly Class are reflective of Remender’s extensive creator-owned work, he has also written a number of titles for Marvel Comics as well including penning the “All-New Captain America” series wherein Sam Wilson became the Captain. This storyline earned Remender a “Special Thanks” credit on Avengers: Endgame since it used his set up with the characters. The series will also seemingly play into the Disney+ series The Falcon and the Winter Soldier which is scheduled to be released later this year on the streaming service.