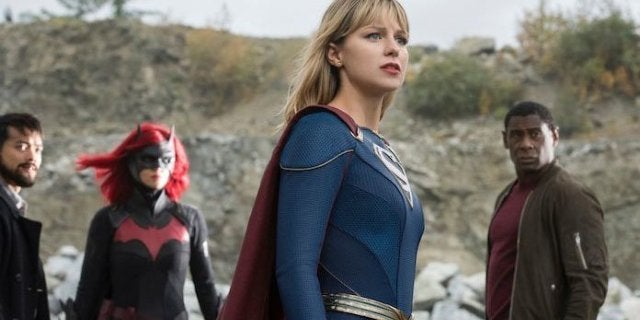 Sunday night’s Supergirl was packed with a lot of big surprises for Kara Danvers and her friends as they adjusted to the new reality of Earth-Prime, but there were surprises in store for fans as well. The biggest surprise may have been not the reveal of some version of Winn Schott who isn’t the Winn who went into the future, but that as far as the heroes of Earth-38 know, there is no Multiverse. For the heroes of Earth-Prime the only reality is their own. All others are gone.

This surprise came when Brainy explained that he’d looked for signs of other realities using vibrational frequencies – which is how they were able to find the other worlds before “Crisis on Infinite Earths” – but there was simply nothing there. The implication of that bit of information is that Earth-Prime is it and that only the people who exist there are those brought back. This seems to be somewhat confirmed when it’s discovered that a whole bunch of people from various now-eliminated words somehow managed to end up part of Earth-Prime.

Here’s the thing, though: there is a Multiverse. Fans have seen it as, in the final moments of “Crisis on Infinite Earths” viewers saw the various new Earths with their heroes, including Earth-2 with Stargirl and Earth-9 with Titans. The Multiverse definitely lives having been reborn thanks to Oliver Queen’s sacrifice. It just seems that Earth-Prime is locked away from it, something that could suggest that the other Earths similarly don’t know the Multiverse exists, either. The idea that Earth-Prime, at least, doesn’t know about the Multiverse was confirmed on Monday by “Crisis” showrunner Marc Guggenheim who posted on Twitter that “The Earth Prime heroes don’t know there’s still a multiverse. Shh. Don’t tell em.”

Now, with fans aware that there’s a Multiverse, it’s not impossible that Earth-Prime’s heroes will eventually discover it (or find themselves discovered by another reality). One of the things that was of particular interest in Supergirl‘s midseason premiere, “The Bottle Episode”, was that one world’s Brainiac-5 had actually bottled his whole world and saved it from “Crisis”. Earth-Prime’s Brainy managed to convince him not to open that bottle (and thus destroy that world and Earth-Prime in the process) by noting that he and his friends were very smart and would figure out a way to restore that bottled world if he would just give them the time to do so. While that is not exactly the same as offering to find a Multiverse, it wouldn’t be too difficult to think that in their efforts to safely open that bottle they might stumble upon a new vibrational frequency and thus discover the Multiverse.

For now, though, Earth-Prime thinks they are alone and there’s something a bit tragic in that. One of the big questions fans have had since “Crisis” is what the status of fan-favorite Earth-2 characters are, including not just Arrow‘s Dinah Lance but The Flash’s Harrison “Harry” Wells and Jesse Quick. While it’s likely that, at least in the case of Harry and Jesse, they are alive and well on that Earth-2, with the Multiverse being a secret from Earth-Prime, it’s possible that Team Flash simply believes their beloved friends and teammates are gone forever.

What do you think about this revelation about the state of the Multiverse? Let us know in the comments below.

Fans can get caught up by watching all five parts of the “Crisis on Infinite Earths” crossover on The CW‘s website or app now or buying them through video on demand platforms. The post-“Crisis” Arrowverse began this weekend with new episodes of Batwoman and Supergirl before launching into new Arrow and Black Lightning today and tomorrow.