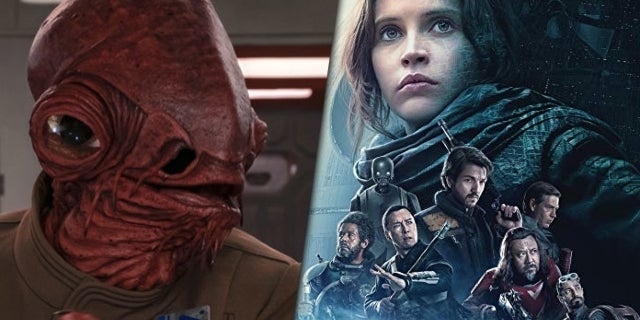 The first live-action spin-off in the Star Wars franchise, Rogue One: A Star Wars Story had its fair share of surprise cameos. First, there was the hefty role Darth Vader ended up playing throughout the flick amongst the digital appearances of Princess Leia and Grand Moff Tarkin to name a few. If Rogue One writer Gary Whitta got his way, there would have been at least one other fan-favorite to show up in the space epic.

Whitta took to Twitter Monday to remind fans that at one point, Admiral Ackbar was set to appear in the film, leading the air assault over Scarif while Rogue One Squadron took care of business on the ground. According to Whitta, however, JJ Abrams had a form of “dibs” on the character, which didn’t allow the character to appear.

Instead, another original character of the same race as Ackbar was introduced. Admiral Raddus piloted his star cruiser Profundity during the Battle of Scarif, a ship Vader eventually boarded. Raddus was subsequently killed while Profundity was destroyed. Despite not making it out of Rogue One alive, the character lived on in a sense after Ackbar petitioned the Resistance to name its flagship cruiser the Raddus.

Originally Ackbar led the orbital attack over Scarif but JJ had got to him first so he was replaced with Raddus. https://t.co/xJN6EBVF4T

As for Ackbar, Abrams was using him in The Last Jedi at the same time Rogue One was in development. In case you missed out, Ackbar ended up dying alongside several other Resistance leaders in the flick, something voice actor Tom Kane doesn’t necessarily agree with.

“I’ve been Ackbar for about six years… and I was not really thrilled about how they blew him out the side of the ship,” Kane told The Star Wars Show Live! at Star Wars Celebration Chicago. “I’m like, ‘Who is this Holdo woman? Nobody knows her, no one’s invested in her — who is she? Why is she saving the fleet?’ If anyone was gonna save the fleet it’d be Ackbar [laughs].”

Rogue One: A Star Wars Story is now streaming on Disney+.

Outside the Rogue One prequel series and Obi-Wan, what other spinoff shows would you like to see in the Star Wars universe? Think it over and let us know your thoughts in the comments section!