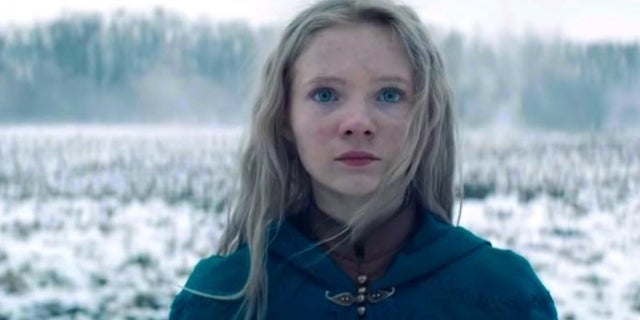 Netflix’s The Witcher makes some specific creative choices in order for the lives of Geralt of Rivia (Henry Cavill), Yennefer of Vengerberg (Anya Chalotra), and Princess Cirilla (Freya Allan) to be shown in great detail despite the fact that the source material doesn’t have them meet until much later. One of the central points of focus across the show’s first season is the invasion of Cintra by Nilfgaard, something which all three characters have ties to or influences on. But the actual invasion itself is pretty intense in the show, so ComicBook.com asked Ciri herself, Freya Allan, about how challenging it was back before the show premiered, and what went through her head when she first read the script.

Major spoilers for the first season of Netflix’s The Witcher follow. You’ve been warned.

“It was a challenge, and I had wanted a challenge when I took on the role, and I just had to get myself into a very particular kind of headspace during those scenes,” Allan says. “I have a playlist of music from film, and so I would listen to that, and I would kind of like be on my own as well, and I would use every moment, sort of get into that kind of zone. So, those scenes were very challenging, but that was kind of how I went about it, and watching films that inspired me.”

“And then, when I read the script, I just remember being very excited to [be] challenged,” she adds. “And I think actually, a couple of those scenes for us […] were in my audition, and so I’d kind of seen them before, I was kind of familiar with them, which was nice. But yeah, no, when I read the script, I was just really excited to get to do everything. But, I was also kind of surprised that she didn’t get to be with Yennefer and Geralt. But, I kind of liked that, because I was thinking, ‘Oh great. It means I can establish she’s serious and independent of that,’ but I hadn’t expected that before the script came in.”

What do you think of Netflix’s The Witcher? Was the Nilfgaard invasion too much, or just right? Let us know in the comments, or hit me up directly on Twitter @rollinbishop to talk all things gaming!

Here’s how Netflix describes the series:

“Based on the best-selling fantasy series, The Witcher is an epic tale of fate and family. Geralt of Rivia, a solitary monster hunter, struggles to find his place in a world where people often prove more wicked than beasts. But when destiny hurtles him toward a powerful sorceress, and a young princess with a dangerous secret, the three must learn to navigate the increasingly volatile Continent together.”

The first eight-episode season of Netflix’s The Witcher is available to stream on the platform now. It has already been renewed for a second season. Lauren S. Hissrich serves as showrunner. It stars Henry Cavill as Geralt of Rivia, Anya Chalotra as Yennefer, and Freya Allan as Ciri. You can check out all of our previous coverage of the latest and greatest adaptation right here.

Fast & Furious 9 Stars Admit the Movie Will Have You Questioning Its Physics
Netflix Cancels Insatiable After Two Seasons
Fly the Unfriendly Skies With MAN-BAT #1 This May
Supernatural Star Gives Out Phone Number, Promises Spoiler Photos
South Park Is Trending After Viral Tweet From She-Hulk Writer