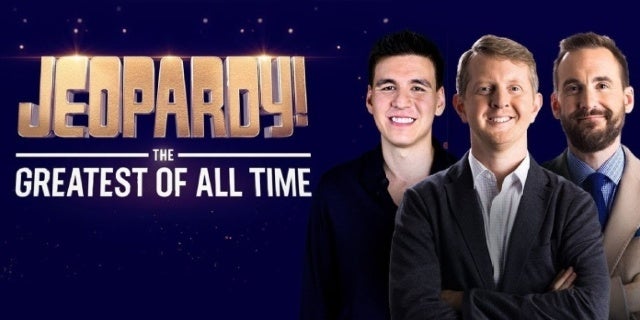 After four nights of intense competition between three of its greatest contestants, The Jeopardy! Greatest of All Time tournament has a winner and it’s none other than… Ken Jennings! The multi-night tournament saw Jennings go up against other Jeopardy greats Brad Rutter and James Holzhauer in a best of seven games matchup. Jennings cemented his place in Jeopardy! history with his 74-day winning streak in 2004, the cap for champions on the series had previously been set at 5 games which made Jennings repeat appearances such a marvel.

Tonight’s game wasn’t without its fair share of drama though as Jennings took an early lead in the first game of the night, betting big in Final Jeopardy and bringing his total for the game to 65,600 points. As the second game neared its final question, Holzhauer had taken a strong lead, sitting at 44,000 points to Jennings’ 23,000. Jennings revealed his final answer in the game, which was correct, but added no points to his total after he wagered nothing. It’s unclear why he took this strategy, perhaps hoping to extend the series to another game. This would have occurred if Holzhauer had wagered all his points and gotten the correct response, but he failed to answer the Final Jeopardy clue correctly and lost all his points, leaving Jennings the winner of Game 4 and the title of Greatest of All Time.

With his win and his $1,000,000 prize, Jennings’ total Jeopardy winnings are now at a lofty $4,370,700. Though he still holds the record for most consecutive Jeopardy wins, he sits behind fellow GOAT contestant Brad Rutter whose total before the tournament was $4,688,436, which got a nice bump thanks to his $250,000 prize from appearing in the tournament.

The Jeopardy! The Greatest of All Time tournament has been ratings monster for ABC and Sony Pictures Television, with an average of almost 15 million viewers per episode, a significant bump for the long running game show.

What did you think of the Jeopardy! The Greatest of All Time tournament? Would you like to see another major tournament from the game show in the future? Sound off below!