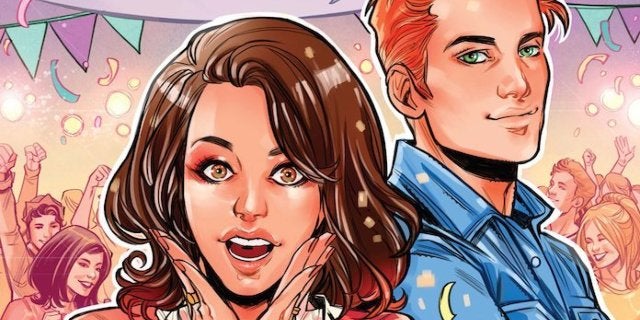 Archie Comics has released a preview of Archie #710, the first appearance of Katy Keene in-continuity since the relaunch of the series in 2015. With a new series premiering on The CW in February, the publisher has taken the opportunity to roll out a four-part storyline featuring Katy in the pages of Archie, complete with trade dress that frames the story arc almost as a minseries, teaming Archie and Katy in “part 1 of 4,” while #710 is paler, smaller, and in the background. You can check out the official preview pages and full solicitation text for the issue below, along with a rundown of what to expect from the upcoming pilot airing on The CW.

There’s a new girl in Riverdale and she’s turning everyone’s heads — and NOT everyone is happy about that! Who is Katy Keene and why is she so Insta-famous and beloved in Riverdale? And, moreover, why is she quickly becoming Archie’s biggest competition? Find out in this brand-new story arc from the creative team of writers Mariko Tamaki and Kevin Panetta and artist Laura Braga — just in time for the brand-new CW series Katy Keene!

You can get a copy on Wednesday at your local comic shop, or snag a digital version that day on ComiXology.

“It is a watershed moment for the company,” Archie Comics CEO Jon Goldwater told ComicBook.com last year when the TV series was announced. “We are called Archie Comics, so most people don’t realize the breadth and depth of our IP. We literally have hundreds of brands, thousands of characters, obviously some way more well-known than others. Comic book people know Katy but the world at large don’t know Katy. And for us to be able to start to mine the depth of our library is a transformative moment for Archie Comics. It’s such an exciting moment in time for the company and it’s as exciting as when Riverdale first came along. It is that kind of seminal moment.”

The show, which debuts on February 6, follows aspiring fashion designer Katy Keene, who meets Josie McCoy, fresh off the bus to chase her musical dreams. Their world is populated with kindred-spirit starving artists, including mysterious socialite Pepper Smith and Broadway-bound performer Jorge Lopez – and his drag queen alter ego, Ginger.