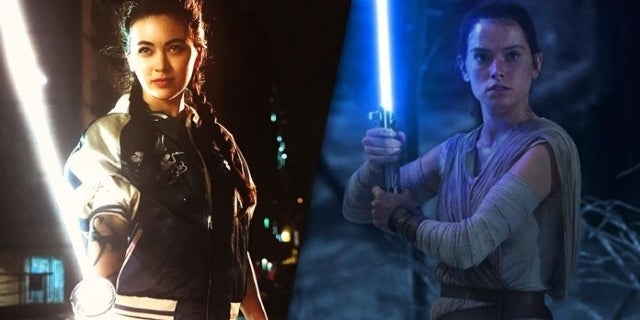 Before Daisy Ridley became a household name with her portrayal of the Force-sensitive Rey, Lucasfilm and JJ Abrams were auditioning a name familiar with fans of the Marvel Cinematic Universe. According to a new report from THR, Iron Fist star Jessica Henwick was up for the iconic role. In fact, the Game of Thrones alum was put through a rigorous six-month auditioning process.

THR notes that character was, in fact, Rey Palpatine. Henwick did end up making a lasting impression on those behind the movie, because the actor says JJ Abrams ended up creating a role in The Force Awakens just for her.

“And then, at the end, J.J. said, ‘I want you to be in the film, but I want to write a character for you,'” the actor continues. “That’s how Jess Pava was created. So, it was a very, very long experience. It’s hard because I’ve been doing this long enough to know that you go in, audition, put it to the back of your mind, don’t think about it and don’t get emotionally invested.”

She adds, “After six months, you can’t help but just desperately want it. I’m also such a big J.J. fan. So, I was a mess at the end of those six months.”

Jess Pava first showed up in The Force Awakens as a member of the fabled Blue Squadron for the Resistance. Since then the character has appeared in the expansive in-canon Star Wars comics from Marvel.

Henwick can be seen in Underwater, now out in theaters. Star Wars: The Rise of Skywalker also continues its theatrical release.

Who’s your favorite non-major Star Wars character? Think it over and let us know your thoughts in the comments below!