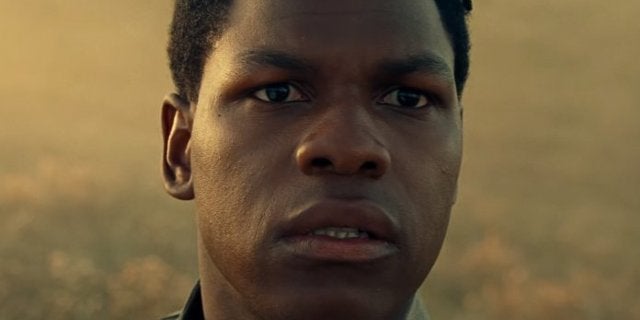 Well, it’s been a strange few weeks for John Boyega after Star Wars: The Rise of Skywalker released. He faced some backlash for a vulgar joke about Daisy Ridley’s character Rey and now the star is addressing the comments on Instagram. Boyega posted a video of him literally defacing or beating up all the critiques of him with stylized editing. He’s punching tweets, cutting comments with lightsabers and flexing all this charisma. Unfortunately for him, it looks like this has whipped the firestorm right back up as he’s trending on Twitter today. But, a lot of his followers are applauding his stance of discounting what the critics are saying. His journey through the Star Wars franchise has been so strange and will probably only get stranger over time. It feels like Boyega and his co-stars are going to need that time off to reflect. But, it looks like he may not be all that interested in that exercise. Last month, he addressed the possibility of Reylo and gave a nuanced answer before undercutting it with those jokes.

“There’s like Reylos, for Rey and Kylo Ren,” Boyega told Variety of the shipping in the community. “Navigating that for me has been interesting, because I love all of Star Wars. And I think that Star Wars should be a hub for imagination and it should be an opportunity for you to be able to expand on the characters how you see fit. What I don’t like is the conflict between ‘ships. I think it’s the most stupid thing in the world. This is Star Wars. It’s a big universe. Someone can be a Reylo and then you know, someone can like the fact that you know, Finn and Poe are together. Someone can like, you know, Poe and Rey together, whoever. It’s Star Wars, you know? Let’s all have fun! The conflict is when I’m like, all right, ‘Let’s all calm down.’ [laughs] This is Star Wars, not ‘Tribal Wars!'”

Now, anyone in the Star Wars fandom will tell you that the group has it’s share of clashes from time to time. Late last year, Boyega made sure to point out the role of social media when it comes to dividing people and warned against letting it affect to much of people’s thought processes. People also were upset about this because it reads as a slight to Kelly Marie Tran.

“Being in this position, you just understand the masses, how the masses think, you know,” Boyega continued. “Through social media, we get to engage, we get to have fun. But at the same time, for those who are not mentally strong, you are weak to believe in every single thing that you read. That’s, you know, it is what it is. I don’t know, for me anyway, when I see that [backlash], I’m like, well, that’s actually not true. But no, it is actually not true. So it’s kind of like [shrugs] it is what it is. But to engage, to connect with the fans who otherwise wouldn’t get a day to day experience, especially during things like the press tour, and behind the scenes stuff, is always good.”

Star Wars: The Rise of Skywalker is in theaters right now.