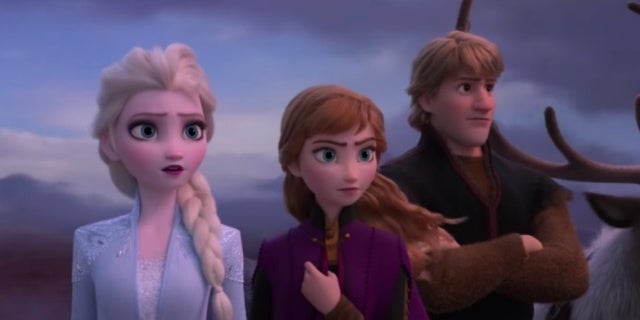 2019 has been a huge year for Disney with the company being behind seven of the ten top-grossing films of the year, which have all earned $1 billion at the box office with the exception of Frozen 2. However, the film hasn’t even been out a month and has already earned $924,335,065 worldwide, so it’s well on it’s way to joining Avengers: Endgame, The Lion King, Toy Story 4, Captain Marvel, Spider-Man: Far From Home, and Aladdin in the billion-dollar club. Despite Frozen 2‘s success, it was just announced by TMZ that there could be trouble brewing for the folks behind the Disney sequel. According to the site, Disney is being sued for using the slogan “Trust Your Journey” on merchandise. Apparently, a Nevada-based company that was “formed as a result of a personal fight and victory over breast cancer” is claiming ownership of the words.

“Trust Your Journey says it’s been using the slogan since at least 2007 and already has its name on a bunch of its own merch … like clothing, jewelry, mugs, etc,” TMZ writes. “In fact … Trust Your Journey says its items are also sold at gift shops and through QVC and Cracker Barrel … so it’s no new kid on the block. In fact, TYJ says its products have grossed nearly $4 million in sales.”

According to the report, Trust Your Journey wants Disney to stop using the slogan and to “fork over a slice of the movie’s massive profits.” TMZ says Disney could not be reached for comment.

Frozen 2 is currently up on Rotten Tomatoes with a 77% critics score and a 92% audience score, and its success is not slowing down. The movie has seen the return of the first film’s stars Kristen Bell (Anna), Idina Menzel (Elsa), Josh Gad (Olaf), and Jonathan Groff (Kristoff). The movie was helmed by the first film’s Jennifer Lee and Chris Buck. While Lee wrote the first movie, the sequel was penned by Allison Schroeder (Hidden Figures, Christopher Robin). The film’s new cast members include Evan Rachel Wood (Westworld, True Blood) and Sterling K. Brown (Black Panther, This Is Us).

You can check out the official description for Frozen 2 below:

“Why was Elsa born with magical powers? The answer is calling her and threatening her kingdom. Together with Anna, Kristoff, Olaf, and Sven, she’ll set out on a dangerous but remarkable journey. In Frozen, Elsa feared her powers were too much for the world. In Frozen 2, she must hope they are enough.”

Key’s New Game Heaven Burns Red Delayed to 2021
The Batman Star Robert Pattinson Possibly Reveals His Bruce Wayne Look
A New Class of Teen Mutants Shakes Up DAWN OF X in CHILDREN OF THE ATOM
IMMORTAL HULK Hunting for Horror in America’s Heartland, Thanks to LEMIRE & DEL MUNDO
Netflix Reveals Major Change to What It Considers a “View”