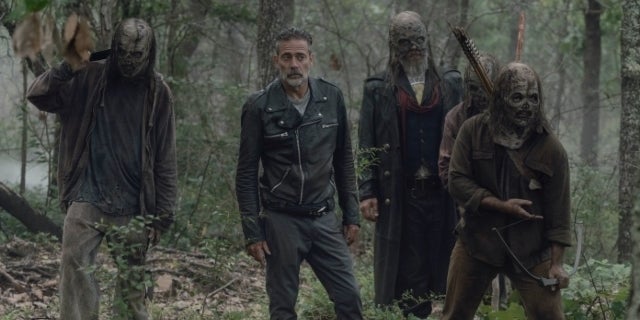 Mixing in fugitive Negan (Jeffrey Dean Morgan) with Alpha (Samantha Morton), Beta (Ryan Hurst) and the Whisperers brings some “interesting and surprising” turns when The Walking Dead resumes its tenth season in February, showrunner Angela Kang teases. Negan was last seen winning Alpha’s approval against Beta’s misgivings in 10×06, “Bonds,” seemingly swearing his loyalty to the skin-wearing cult after a mysterious accomplice set him loose from the Alexandria jail. Also in play is Alpha’s currently missing daughter Lydia (Cassady McClincy), believed dead by the Whisperers, and the newly-flipped Gamma (Thora Birch), who is at risk of being exposed as a traitor after providing the Alexandrians with inside information meant to help them find Alpha’s walker horde.

“The next half of the season, we saw that our group of survivors were trapped in a cave, so we got to tell the story of what happened as they find themselves in this impossible situation surrounded by the herd, trapped underground,” INSIDER learned from Kang, who added there’s “suspicion and there’s grief” among the characters in the second half of the season. “And, Alpha, things are ramping up on her side, too. The Whisperers are trying to stay a step ahead of our communities, but it feels like our people are kind of closing in on them as well.”

“And now that Negan is a part of that mix,” she added, “some really, hopefully, interesting and surprising things will happen as that story starts to play out more.”

Morgan has been careful not to refer to Negan’s Season 10 story as a redemption arc — despite heroic actions that saved Judith (Cailey Fleming) and Dog in Season 9, and Aaron (Ross Marquand) and Lydia in Season 10 — saying at San Diego Comic-Con in July, “It’s people like Judith [who] have brought out stuff in him, certainly, that the audience has gotten to see, but Negan is always Negan. He’s going to always have a sharp tongue. He may not be bashing a head with Lucille, but he will certainly stab you with some words.”

Negan might appear to be a card-carrying member of the Whisperers, but one of Morgan’s co-stars earlier teased Negan teaming up with an unexpected ally in the survivors’ fight against Alpha in Season 10. We’ll see how that plays out when TWD Season 10 returns with new episodes Sunday, Feb. 23 on AMC.