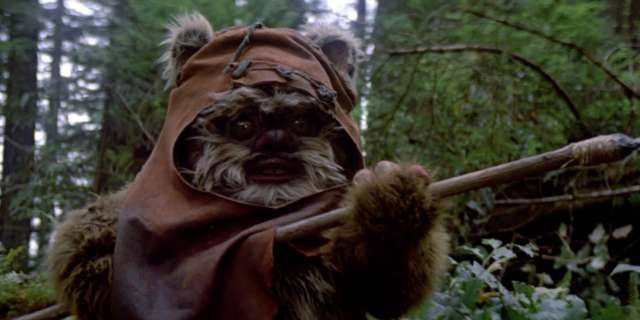 The Star Wars saga will finally come to a conclusion in less than a month, as the Skywalker Saga will end with the ninth film in the franchise. But Star Wars: The Rise of Skywalker will not only conclude the sequel trilogy, wrapping up the adventures of Rey, Finn, and Poe Dameron, but it will also feature the returns of many characters we’ve not seen fore decades. While fans already know about the return of Emperor Palpatine, who will play a prominent role in the film, we only just learned about another fan-favorite creature showing up for Episode IX.

As hinted in the new behind-the-scenes clip from the film, it appears that a character not seen since Star Wars: Return of the Jedi will make an epic return. Get ready to experience Ewok fever all over again, because it looks like Wicket is returning.

As revealed in the new clip, Warwick Davis is shown in his full costume as Wicket the Ewok.; But the last time he wore that costume, he was around the age of 12 years old. But in this clip, he’s obviously much older, so it looks like this footage was filmed recently — and possibly confirms the return of the Ewoks in the latest film.

It makes sense that the Ewoks would make a return considering the presence of the Death Star in the new film. After all, the Death Star was in orbit around Endor and its moons when it was destroyed, so it stands to reason that Resistance would take solace on the forest moon.

The new Star Wars movie is serving as the conclusion to every previous film in the saga, and Wicket will also be joined by another major character in Emperor Palpatine. And while some of these comebacks might seem frivolous to fans, director J.J. Abrams insists that it’s all a part of the story that will wrap up the nine-film Skywalker Saga.

“Some people feel like we shouldn’t revisit the idea of Palatine, and I completely understand that,” Abrams says in an interview with Empire Magazine. “But if you’re looking at the nine films as one story, I don’t know many books where the last few chapters have nothing to do with those that have come before. If you look at the first eight films, all the set-ups of what we’re in IX are there in plain view.”

Fans will get to see how it all wraps up when Star Wars: The Rise of Skywalker premieres in theaters on December 20th.