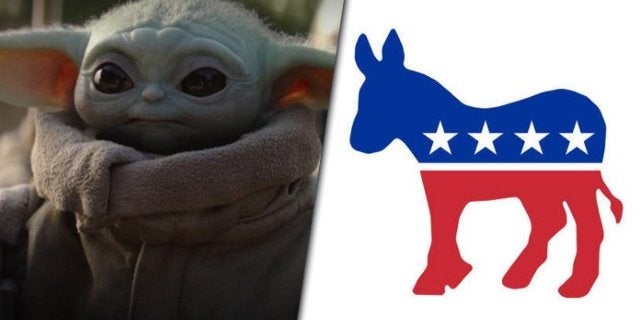 In the weeks since his debut in Star Wars: The Mandalorian, “Baby Yoda” has already made a larger impression on social media than some Democratic presidential candidates, according to a new report from Axios. The collected data reflects how many social interactions articles about the figures earn and with the candidates having many more articles written about them over the months, the smaller number of articles about the Force-wielder garnering more interactions proves his power on social media. Additionally, the data collected by the site doesn’t account for all of the social media posts related to each identity, likely making Baby Yoda’s social media power even stronger.

The site notes that, “In terms of raw interactions since November 12th, Baby Yoda‘s 2.28 million trail only the Democratic race’s group of frontrunners — Joe Biden (8 million), Bernie Sanders (2.9 million), and Elizabeth Warren (2.53 million). But the rate of interactions is massive when you consider that Baby Yoda would only rank 10th in terms of the number of articles (1,368) written about it.”

As anyone who has been on social media in the past three weeks has noticed, Baby Yoda memes and GIFs have overwhelmed users, due largely in part to his surprising debut on The Mandalorian without any advanced warning. Series creator Jon Favreau previously shared his appreciation that Disney kept merchandising for the character under wraps to preserve the surprise for viewers.

“I have to thank Disney and Lucasfilm, because the way the cat usually gets out of the bag with that stuff is merchandising and toy catalogs and things like that,” Favreau previously explained to Collider. “So they really back us up. We really wanted to have it be that you had to watch it yourself, so that every time you watch the show, there are new twists and secrets that come out. That requires a lot of restraint from the people who are footing the bill, saying they’re gonna hold back on certain things so that the public doesn’t know ahead of time. Part of that was holding back on some of the merchandise and holding back on some of the characters.”

New episodes of Star Wars: The Mandalorian debut on Disney+ on Fridays.

Are you surprised that Baby Yoda is more popular than the politicians? Let us know in the comments below or hit up @TheWolfman on Twitter to talk all things Star Wars and horror!

Agents of SHIELD: All the Characters We Want to See Return in the Final Season
Marvel’s Agents of SHIELD Star Believes Fans Will Be Satisfied With Series Finale
Enoch Trends on Twitter After Agents of SHIELD Fans Showed Support For Their Favorite Chronicom
Watchmen Showrunner Explains the Genesis of Hooded Justice’s Story in the HBO Series (Exclusive)
DC’s LUCIFER Switching to Collected Edition for Next Arc