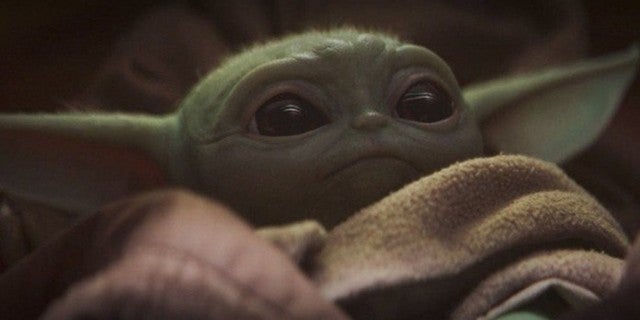 Star Wars: The Last Jedi director Rian Johnson was recently expressing his enthusiasm for “Baby Yoda” in Star Wars: The Mandalorian, but his seemingly innocent comments might have revealed a clue about the character’s fate in the upcoming journey. Fans first witnessed the character in the series premiere of the series on Disney+ earlier this month, being completely oblivious to its existence, thanks to the secretive marketing campaign. With fans having little idea of what to expect as the rest of the season unfolds, many mysteries have surrounded the character, but Johnson’s comments will likely excite fans of Baby Yoda.

WARNING: Minor spoilers below for The Mandalorian

When speaking with TheWrap about the character, Johnson noted that he saw the Baby Yoda on set when he visited a month ago, which would seemingly confirm that we can expect to see him in Season Two of the series in some capacity.

“He’s amazing!” Johnson shared with the outlet. “I visited the set of The Mandalorian a month ago, and I spotted Baby Yoda in the corner and the producer shot me a look as if to say, ‘You can’t say a word!’ I’ve been holding that secret in my heart for forever now. And the memes are amazing. I’m very pro-Baby Yoda.”

It seems evident from these comments that Johnson likely thought the mere existence of Baby Yoda was the secret that he had to hold on to, but with the added context that he earned a look that implied he shouldn’t reveal what he saw, it’s possible he didn’t realize the extent of what he had to keep a secret.

In the first episode of the series, the lead character is offered a bounty, ultimately discovering the figure he was tracking was “The Child,” as he is referred to in the series. After bonding during various trials and tribulations, the Mandalorian ultimately handed over the Child to the Client who contracted him, only to have a change of heart about the potentially harmful fate that the Child would suffer. With five more episodes to go in the first season, fans have wondered how big of a role the Child would play in the rest of the narrative and, while it’s possible that the series shifts gears, Johnson’s comments seem to imply we’ll at least catch a glimpse of Baby Yoda at some point in Season Two.

Were you expecting to see Baby Yoda in Season Two? Let us know in the comments below or hit up @TheWolfman on Twitter to talk all things Star Wars and horror!