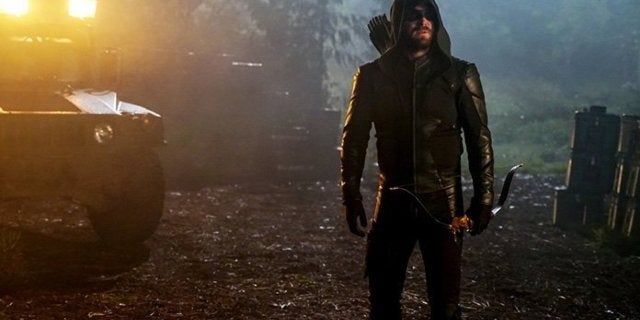 The CW has released photos for “Purgatory,” the midseason finale for Arrow‘s eighth and final season. The episode, which is set to air on December 3, will be the final episode of not only Arrow, but all of the Arrowverse shows before The CW’s five-episode epic crossover event “Crisis on Infinite Earths” arrives on Sunday, December 8. In the episode, Oliver and his allies will head to Lian Yu — which, coincidentally means “purgatory” — and as you can see from the extensive photos it’s a return that will see Oliver encounter some familiar faces — and not all of them good.

Among the familiar faces Oliver will encounter in “Purgatory” is Yao Fei (guest star Byron Mann) who gave Oliver his first hood and quiver so many years ago. Considering that much of Arrow’s last season has been built around revisiting key moments in Oliver’s history, it’s fitting that the birth of Green Arrow, in a sense, is among them.

You can check out the official synopsis for the episode below as well as photos beyond that.

BYRON MANN GUEST STARS — Oliver’s (Stephen Amell) mission takes him to Lian Yu where he tries to ignore the repercussions of the looming Crisis until he receives help from an old friend. Meanwhile, a united Team Arrow faces a recognizable villain. James Bamford directed the episode written by Rebecca Bellotto & Rebecca Rosenberg.

“Crisis on Infinite Earths” kicks off on Sunday, December 8 on Supergirl, runs through a Monday episode of Batwoman and that Tuesday’s episode of The Flash. That will be the midseason cliffhanger, as the shows go on hiatus for the holidays and return on January 14 to finish out the event with the midseason premiere of Arrow and a “special episode” of DC’s Legends of Tomorrow, which launches as a midseason series this year and so will not have an episode on the air before the Crisis.

Heaven and Hell go to War in AWA’s ARCHANGEL 8 #1 First Look
WOLVERINE and SPIDER-MAN Rejoin FANTASTIC FOUR – But Not With HULK or GHOST RIDER
Star Wars: Rian Johnson Gives Latest Update on His Plans With Lucasfilm
ROBIN Arrives in the Future in LEGION OF SUPER-HEROES #3 Preview
DANZIG Brings his Own Horror Comics to Life in VEROTIKA Trailer