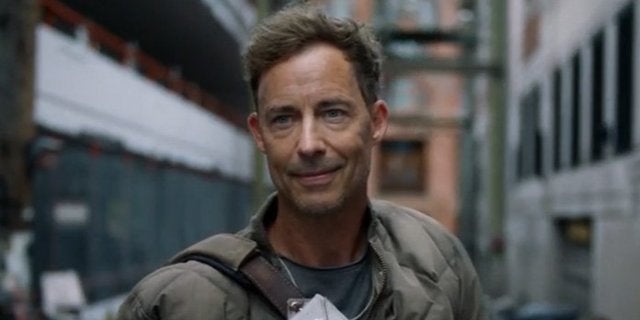 While Tuesday night’s episode was mostly focused on Ralph Dibny/Elongated Man (Hartley Sawyer) and Barry Allen/The Flash (Grant Gustin) having their James Bond-esque adventure in Midway City, fans of The Flash also got to see a bit more of the latest incarnation of Harrison Wells — Nash (Tom Cavanagh). The newest Wells has been a bit of a mystery this season, showing up and presenting himself as a multiverse-hopping myth buster who turns out to be on the trail of The Monitor. But in “License to Elongate” viewers saw him team up with Allegra (Kayla Compton) and in the process, appear to have some sort of emotional connection to Iris’ (Candice Patton) intern.

In the episode, Nash asks for Allegra’s help in identifying the Eternium blocking the entrance to The Monitor’s (LaMonica Garrett) Central City lair. As that partnership plays out, Nash ends up telling Allegra — while giving her a pep talk about her powers — that she reminds him of someone. Later, we see him looking at Allegra with an expression that suggests that there may be more to the situation that Nash would present. Now, The Flash showrunner Eric Wallace says that the brief tenderness from Nash is a major part of his story.

“That’s really a huge launching point for his story,” Wallace told Entertainment Weekly. “What Tom does so well is he’s very friendly most of the time, but this is a more abrasive character. So he’s a man of action and when he stops, looks back at someone in a caring way (not a creepy way), loving, it means something that definitely plays –and also, it’s gotta tie into what it means for ‘Crisis’, what does it mean for after ‘Crisis’.”

The idea that this latest incarnation of Wells having a major role in the setup for “Crisis” isn’t a new one. Earlier this year, Wallace said much the same, noting that this new Wells “is integral to not just the first half of the season, but his storyline leads directly into the crossover.” Fans have also wondered if this new Wells might actually end up being Pariah. At The CW’s DC TV series panel at San Diego Comic-Con this summer, Wallace revealed that Cavanagh would be playing Pariah in “Crisis”, though he also mentioned that the actor would be play two different characters with one of them working for the Anti-Monitor in some capacity.

Even if Nash doesn’t end up being Pariah, Wallace has already hinted that Pariah will have a major emotional impact.

“IN the original miniseries, it’s Pariah who is very much integral in releasing the Anti-Multiverse,” Wallace said. “For Tom to play such a pivotal character… it’s just going to tear your guts out and make you cry.”

Wallace wouldn’t divulge the reason behind Cavanagh’s new role, as it is scheduled to be revealed at the end of the first “graphic novel.” He teased that these developments, “lead up to a very, very big twist at the end of the Bloodwork case that launches ‘Crisis.'”

What did you think about the surprising Nash moment in “License to Elongate”? Let us know in the comments below.

The Flash airs Tuesdays at 8/7c on The CW.