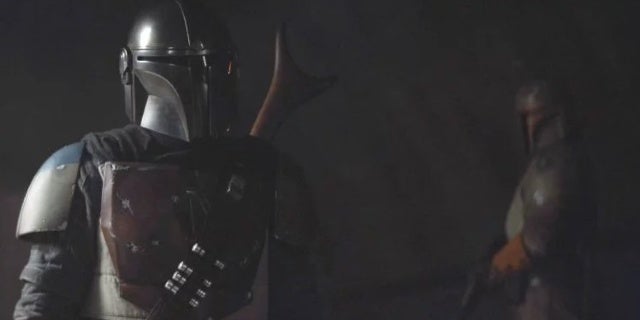 Throughout the production of The Mandalorian‘s first season, fans have been wondering whether or not Boba Fett would be involved in the series. Despite very little screen time in the original trilogy, Boba Fett has become one of the most popular characters in Star Wars lore, so much so that a standalone movie was in the works at one point, with Logan director James Mangold attached. The connections between Boba Fett and The Mandalorian are clearly there, and some fans are thinking that the classic bounty hunter actually appeared in the first episode.

About halfway through the first episode of The Mandalorian, which arrived on Disney+ Tuesday morning, the main character walks into an underground lair to have a piece of armor forged. A mysterious figure walks by in the shadows, stopping to turn and look at The Mandalorian as he walks by. When you brighten up the image, the figure looks just like Boba Fett, down to the specific colors of his armor and the mark on his helmet.

Take a look at the image below, which arrives at the 18:31 mark of the episode.

“Boba Fett is not one of the all-new original characters,” he explained. “There’s a 30-year stretch of story time that hasn’t been explored at all, except in the extended universe.”

So Boba Fett isn’t really one of the characters in the show, but that doesn’t exactly rule out a sneaky cameo, right?

Series star Pedro Pascal plays a very different bounty hunter, one who’s name may or may not have been revealed yet. The man behind the mask wants to make sure that his character doesn’t get confused with Boba Fett, since the titular Mandalorian does ultimately want to be on the right side of history, a characteristic that is on full display in the premiere’s final scene.

“Ultimately he wants to do the right thing,” Pascal said in an interview earlier this year. “But his duties could very much be in conflict with his destiny and doing the right thing has many faces. It can be a very windy road.”

Do you think that was Boba Fett in The Mandalorian? Let us know in the comments! If you want to try out Disney+, you can do that here.

Note: This is not a sponsored post, but if you purchase one of the awesome products featured above, we may earn a small commission from the retailer. Thank you for your support.