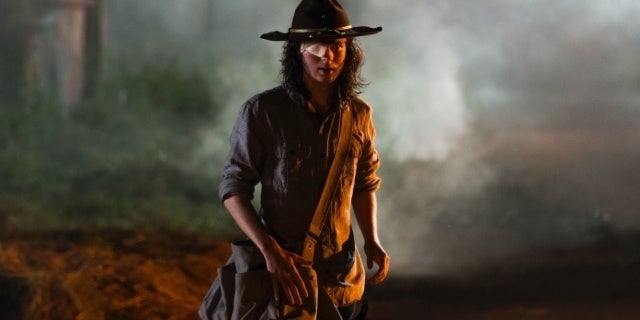 The Walking Dead star Chandler Riggs says past comments about former showrunner Scott Gimple on social media are “completely friendly” jokes. Riggs appeared to poke fun at Gimple in an April tweet sent in response to the official Walking Dead Twitter, which urged fans to “read the comics.” In reply, Riggs wrote, “That’s what I told Scott Gimple.” Seemingly a dig at Gimple for killing off Riggs’ Carl Grimes midway through Season 8 in a major departure from creator Robert Kirkman’s comic books, Riggs clarifies the tweet was made in jest and was not intended to be taken “aggressively.”

Riggs’ father, William Riggs, published a critical post aimed at Gimple shortly after the airing of episode 8×08, “How It’s Gotta Be,” which ended with Carl revealing an incurable walker bite. Carl would ultimately die in the mid-season premiere, “Honor,” after a winter hiatus.

“Watching Gimple fire my son 2 weeks before his 18th birthday after telling him they wanted him for the next 3 years was disappointing,” Riggs wrote in a since deleted Facebook comment. “I never trusted Gimple or AMC but Chandler did. I know how much it hurt him. But we do absolutely know how lucky we have been to be a part of it all and appreciate all the love from fans all these years!”

When clarifying his comments, the elder Riggs reported Gimple said in a phone call his son was needed for three years. Riggs signed a “typical” two-year contract, guaranteeing one year and a second at AMC’s option. At the time just shy of turning 18, Riggs enrolled at the University of Georgia and purchased a house near TWD’s Senoia, Georgia, set to be closer to work.

In a meeting with Gimple, the Riggs family was told “Carl would be gone in a few episodes,” leaving Chandler “absolutely devastated.”

“I was disappointed Scott had been dishonest with a 17 year old making life decisions and waited to tell us,” Riggs wrote in his post, adding he was “extremely grateful” for Chandler’s eight-year run but felt his son “had earned better treatment.”

During initial conversations about Season 8, Gimple “didn’t mention” Carl’s death, the star told ET after his death-isode. Riggs would only learn of plans to kill off Carl after performing rehearsals on 8×06, “The King, the Widow, and Rick,” the episode where Carl is bitten.

If the ex-Carl actor has any misgivings about being killed off TWD, he hasn’t expressed them publicly.

In a comment published on a Reddit thread in November 2018, Riggs admitted he “sucked when it mattered,” saying his last few seasons of the show were affected by schoolwork.

“in hindsight and in the best interest of the show, i do feel like if i didn’t get killed off, things would not have gotten better on my end and twd might’ve been better off recasting carl,” Riggs wrote. “don’t get me wrong i loved everything about playing carl and it would’ve been really awesome to play out all of those storylines [with the Whisperers], but i would have been juggling college and the show, and my performances would suffer because of it as shown when i was in high school.”

Though Riggs once said he was “satisfied” with Carl’s final episodes, he poked fun at Carl’s bite scene when engaging with the official Walking Dead account on Instagram.

Riggs is also open to returning to the series through flashback and hopes to reunite with TV dad Andrew Lincoln in the Rick Grimes movies now in the works under Kirkman and Gimple, since elevated to TWD chief content officer.