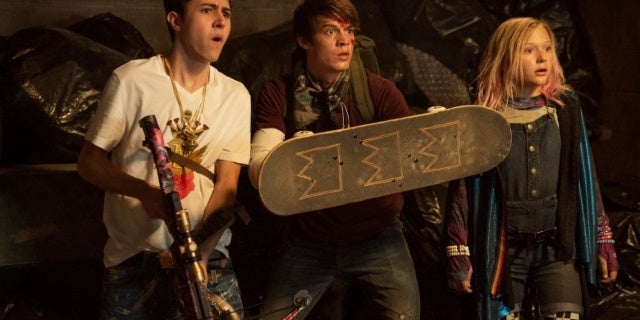 If you’ve watched even one episode of Daybreak on Netflix, you know that the series isn’t quite like any other apocalyptic tales on TV. Honestly, watching just a few minutes will tell you that much. Not only is Daybreak aiming to have fun with the end of the world, but it’s also insanely over the top with its jokes, characters, and references. “Extra” is a really good way to describe it. Daybreak may be one of the most extra shows of the year.

In one of the earliest lines of the show, lead character Josh Wheeler tells the audience (in a fourth wall-breaking aside that becomes a staple of Daybreak) that “extra” is the word of the day, confirming that the creative team knows full-well that Daybreak is way over the top. It’s written into the DNA of the show.

ComicBook.com recently spoke with Daybreak creator Aron Eli Coleite about the tone of his new Netflix series, and why he and the team wanted it to be so extra.

“You know, because when we started talking about, ‘Okay, what is this show going to be,’ we wanted to be as irreverent and as meta, if you call it meta or whether you call it extra, we didn’t want to pull any punches,” Coleite explains. “We really wanted to go for it. And honestly, it really boils down to one thing, which is Walking Dead is really serious. I watched Watchmen last night, it was great. It’s very serious.

“The world is really, really f**ked up right now. And we totally acknowledge that. And I think what we were looking for, for ourselves, for the world was something that had a little bit of irreverence to it that didn’t take itself so seriously, that could be extra because we just wanted to create a fun experience for the audience. We wanted to be able to be a little bit of a respite from how insane our world is. And if we’re looking at the end of the world, let’s do an end of the world that’s actually the kind of place where you want to be. Where you can laugh and you can smile. Where you can have fun. We do talk about serious things in the show, but we don’t do it so seriously that it’s okay to be entertained for 10 hours and that sometimes we need that break and need to remind ourselves of our own. It’s okay to laugh. It’s okay to have fun and that it helps for the fights to come.”

Have you watched Daybreak on Netflix yet? What do you think of the series? Let us know in the comments!

JOE QUESADA’s ‘I Am America’ Art Being Auctioned For Charity
AVATAR 2 to Resume Filming in New Zealand
MIKE DEL MUNDO Teams with FREDDIE GIBBS and THE ALCHEMIST for ALFREDO Comic
AVENGERS #33 Brings in MOON KNIGHT for a ‘Multi-Layered Superhero Epic’
The Saga of Tanya the Evil Gets Smartphone Game!