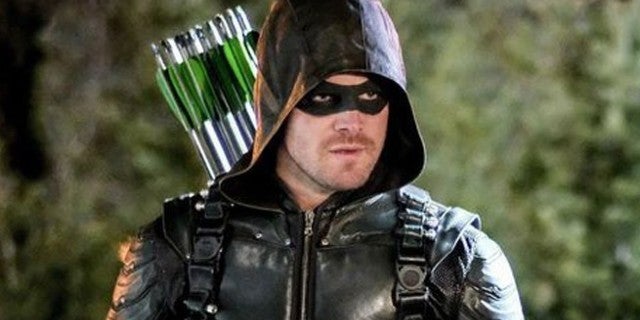 Arrow is winding down, but that doesn’t mean that there aren’t still some surprises in store. All good things come to an end, and for series star Stephen Amell that means even time in that signature suit. Amell posted a picture of himself in the costume to commemorate the last time he would ever don the hood. It’s been a long ride and Arrow has been bringing the heat in this final season as everything heads towards Crisis on Infinite Earths this Winter. Still, it is pretty surreal to see the hero mark the last time in the green. It seems like every other day there is some other benchmark for the series being at a close. Fans are emotional and rightfully so, but not too many could argue that Arrow hasn’t brought the goods here in the final season. Amell and the crew should truly be proud of what they have built and the legacy that they are leaving behind on The CW.

Ben Lewis plays William in some of the very fun segments of the season with Oliver’s kids in the future. Seeing these actors play off each other in real time has been a hoot for audiences so far. For fans who have enjoyed these extended team-ups, don’t despair. The actor says there is more coming, but can’t divulge exactly how much more that entails.

Tonight is the last night I wear the Arrow suit. pic.twitter.com/P4QTUSOQgG

“I can’t say how long, but I can say that there will be several missions,” Lewis said. “Obviously the missions are extra special because it’s members of OTA and members of FTA working together for the first time. As always on Arrow, the stakes are extremely high, but they may be even higher and more dynamic by these added family dynamics. [They] just make it even more potent and dramatic.”

And when it comes to those missions, it seems like all of the characters involved have more than just the immediate missions at hand as an objective. Lewis said that he thinks William and the others see a chance to change the future.

“I think they all feel that way,” Lewis said. “I think they all sort of recognize the toll that the future takes on their children and that they have an opportunity to potentially rewrite that future and create a better, safer version of Star City for their kids. I think [that’s] what really drives and motivates them over the next few episodes.”

Arrow showrunner Beth Schwartz talked about the formidable balancing act heading into the latest Crisis. Things are ramping up in a big way and finding a way to ensure that all the characters feel included during the event would be a primary concern.

“There are so many characters [to consider]. So many characters,” Schwartz said during a recent interview. “And we’re definitely thinking about all of that, because just as much as our fans want to see it, as people who have been on the show for a long time, we are also fans of these characters. So we’re going to make sure that everyone has a great final season.”

“That’s the exciting part of next season, only having 10 episodes,” Schwartz commented. “We’ve [been] brainstorming and thinking about who we want back, because there are so many characters that we love… I think every episode is just going to be humongous. We’re going to fit it all in, and it’s definitely going to be an amazing season.”