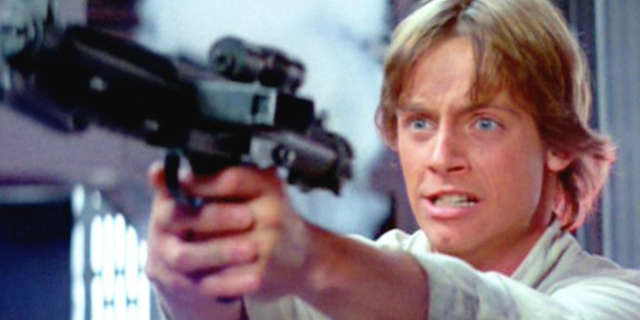 Mark Hamill is in full reflection mode during this lead-up to Star Wars: The Rise of Skywalker. This week sees him watching and reacting to his original audition for the franchise on YouTube. Omaze partnered with the star for a sweepstakes. During the video, Hamill opens the curtain to the early days of Star Wars. He jokes, “Look at that haircut! That’s the biggest thing I contributed to the look of Luke Skywalker, that Beatle-esque haircut.” But, Hamill also talks at length about his co-stars, and how George Lucas shaped this entire massive franchise from the ground up. Things were still in the infant stages when he did this audition tape, so a lot of things that seems like no-brainers now were still being decided upon. The contrast between then and now is staggering not just because of the time that has passed, but more for how the entertainment landscape has changed since.

One of the first revelations comes around the story structure. Hamill begins, “When I did the scene I thought Han Solo was the lead character and I was the sidekick. Harrison was a bona fide leading man, so I thought he was Captain America and I was Bucky. So when I eventually got the script, and I opened to the front page, it said: The Star Wars: The Adventures of Luke Starkiller as taken from the “Saga of the Whills.” I realized, oh my gosh! It’s through my eyes.”

The star also shared that the audition was the first day he ever met Harrison Ford, which is mind-blowing that it is all caught on camera. Hamill said, “He’s one of my favorite people. I’m so lucky to have been able to work with him. He was the personification of cool. I mean, he was Han Solo. He’s better in this screen test than I am and he’s off-camera, so that should give you some idea.” Funny enough, Hamill called Ford’s character Hans instead of Han. So, there was some more work to be done on establishing exactly how these names sounded in-universe.

When talking about Carrie Fisher, Hamill speaks so warmly of his co-star. Noting that she was basically running circles around Luke and Han. He began, “When Carrie came over, she was the final piece of the puzzle. She was effortlessly feminist, you know? She wasn’t some shrinking violet that needed a guy to come rescue her. In fact, she made Han and Luke look like chumps. She was anything but what I expected. I mean, I sort of thought, ‘Well, she’s 19. That’s barely out of high school.’ And in many ways, she was a lot older and wiser than I was.”