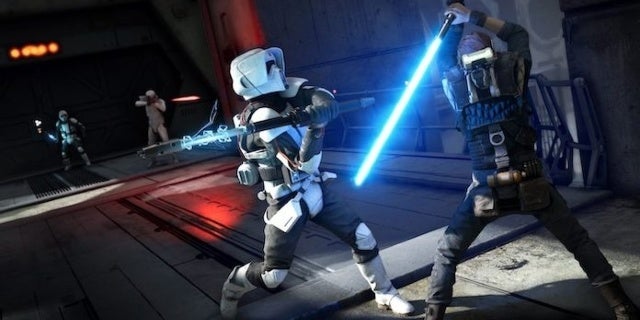 The upcoming video game Star Wars Jedi: Fallen Order is set to release in just over a week, and while everyone waits with bated breath to play the latest and greatest Star Wars game, more and more information about the game appears to be coming out from interviews as well as a recent preview event. While it was previously known that the game would basically avoid the whole “lightsabers cutting people apart” thing, Respawn has expanded on this narrative choice — and pointed at the films for its reasoning.

“So, with Jedi: Fallen Order we’ve really followed the authentic Star Wars / Lucasfilm realization of dismemberment,” Aaron Contreras, narrative lead on the game at developer Respawn Entertainment, told The Verge. “Which is that it happens in big story moments occasionally, but you don’t see it happening constantly to sentient people.”

To put it another way: it’s one thing to see Jedi slicing and dicing their way through a bunch of robots; it’s another thing entirely for them to do it to thinking, feeling, breathing people, even if they are Stormtroopers. “Droids and creatures that you fight will be dismembered on a frequent basis, but otherwise we save it for big moments,” he added.

“We’ve really worked throughout the entire development process with Lucasfilm,” Contreras continued. “And this is a Star Wars thing, this is how Star Wars treats dismemberment and the lightsaber. So we’re trying to stay true to the Lucasfilm vision of what the lightsaber is and how it should be used,”

What do you think of what we’ve seen of Star Wars Jedi: Fallen Order so far? Are you excited to pick up the game when it releases? Let us know in the comments, or hit me up directly on Twitter at @rollinbishop to talk all things gaming!

Here’s how publisher EA describes the game over on its official website:

“Aided by a former Jedi Knight, a prickly pilot, and a fearless droid companion, you must escape the sinister machinations of the Imperial forces in this story driven adventure.”

Star Wars Jedi: Fallen Order is scheduled to release for PlayStation 4, Xbox One, and PC on November 15th. You can check out all of our previous coverage of the upcoming Star Wars game right here.

Netflix Goes Down Early on Memorial Day for Users
Logan: James Mangold Says He Never Thought Fox Would Allow This Tragic X-Men Reveal
HBO Max Arrives on PlayStation 4 and Xbox One at Launch
Geoff Johns on Why Now Is the Right Time for Stargirl’s Family-Friendly Tone
Blumhouse’s Upgrade Getting TV Series Sequel