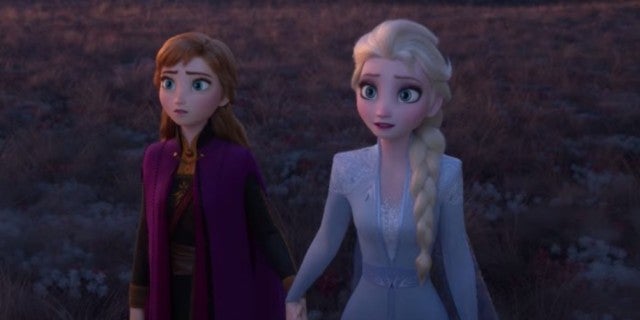 Disney fans are eagerly counting the days until Frozen 2 hits theaters, and audiences are magically transported back to the world of Arrendale. If the array of trailers weren’t enough to get you hyped, a new clip from the film has officially made the rounds online. The short clip features a reunion between Elsa (Idina Menzel), Anna (Kristen Bell), Krisoff (Jonathan Groff), Olaf (Josh Gad), and Sven, as they plot for their journey ahead. You can check it out above.

Frozen 2 will take the franchise’s ensemble on a whole new adventure, as they venture into an ancient land to find the origin of Elsa’s powers.

“You know I can’t tell you anything, Disney is so tight-lipped about it. What can I say? I have seen parts of it, because when we record we see things, I haven’t seen the whole thing, but I’ve obviously read the script. It is not ‘Episode II’ of Frozen,” Bell told ComicBook.com at San Diego Comic-Con earlier this year. “It is a story that we waited a long time so that it would reveal itself to the creators. What is the next progression in these characters’ lives that needs to be told? Not just like, ‘What’s another storyline we could do?’”

“It’ll still be appropriate for kids and kids will still love it, but these girls have grown up as well a little bit,” Bell continued. “I think the original fans of Frozen, who were little girls and now might not think it’s for them, will be pleasantly surprised.”

“I think I can say the number one thing we all held hands on, because we all signed back up again on that one is to not think of the Zeitgeist part of Frozen, because that’s not how we made it in the first place,” the film’s writer, Jennifer Lee, previously told ComicBook.com. “In fact, a lot of people didn’t know if the world was interested in the story we had to tell, because it was a musical with two female leads. And we spent it from building character out, and from every inch of what they’re struggling with. How can we push them? What are we feeling about them? And we’re doing the same thing. I’m really excited about where it’s going. I can’t wait to share it. But we don’t start production until the summer. It’s still got its journey. It’s still going.”

What do you think of the first clips from Frozen 2? Share your thoughts with us in the comments below!