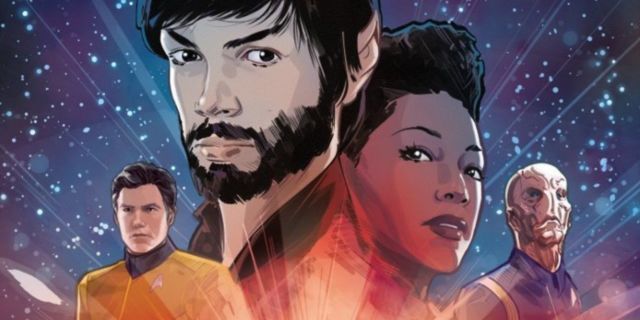 Star Trek: Discovery experiencing the long off-season with months left until the series returns. With Star Trek: Picard and Star Trek: Lower Decks on the horizon, Discovery won’t return for months. It’s a good thing then that there’s a library of Star Trek: Discovery novels, comics, and even games to enjoy. Don’t know where to start? We’re here to help. In this guide we’ve listed every piece of expanded universe content for Star Trek: Discovery, in (more or less) chronological order. We offer an overview of each offering to help you figure out which stories most appeal to you and what you love about Star Trek: Discovery.

There’s always the question of whether any of these tie-in materials are canon. For the most part, our answer would be that it doesn’t matter. A good story is a good story. But, for what it’s worth, there’s been a significant effort made to coordinate the show with its tie-ins. While they may not be 100% official canon, these stories feel much more connected to show’s main story than Star Trek novels and comics of past eras.

What is it? A novel
Who made it? Author Dayton Ward
When does it take place? 10 years before the Battle of the Binary Stars
Who is for? The “find Prime Lorca” crowd, fans of Prime Georgiou, those who want to see a bit of Captain Kirk’s past.

Drastic Measures is the earliest-set story to feature Discovery characters. The novel tells the story of a dark chapter from Captain James T. Kirk’s past, the Tarsus IV massacre.

The story follows Phillipa Georgiou and Gabriel Lorca (the prime versions, in both cases) as they do their bests to aid the people of Tarsus IV. The novel also offers a clue about what may have become of prime Lorca after the destruction of the Buran.

What is it? A novel
Who made it? Author James Swallow
When does it take place? A few years before the Battle of the Binary Stars
Who is it for? Anyone who loves Saru

Fear Itself takes place a few years before the opening episode of Star Trek: Discovery. This is during the time when Saru and Michael Burnham were both officers under Capt. Georgiou aboard the Shenzhou.

This story takes place as Georgiou is preparing to name her new First Officer. The pressure gets to Saru and he makes some rash decisions that set off a domino effect involving unfamiliar species. Through fixing his mistakes, the story shows that Saru is among the most capable Starfleet officers in Star Trek canon.

What is it? A novel
Who made it? Author David Mack
When does it take place? About one year after “The Cage,” and one year before the Battle of the Binary Stars
Who is it for? Anyone looking for more of the Spock and Michael Burnham relationship, or of “The Cage” era Enterprise crew.

The first Star Trek: Discovery novel didn’t shy away from putting Discovery‘s new character up against the heroes of Star Trek‘s past. Desperate Hours sees the crews of the Shenzhou, and the Enterprise teaming up to solve a mystery while racing the clock.

The novel pairs off parallel characters from the two ships. Burnham with her estranged brother Spock. Saru works with Number One. Georgiou’s leadership contrasts with Pike’s.  Mack uses these parallels to reveal new sides of the characters. Mack wrote the novel well before the Enterprise crew was cast for Discovery’s second season. That means some of the characterization and bits of continuity may a bit off if you’ve already watched season two. But those are minor quibbles considering what a solid story the novel has to tell.

What is it? A comic
Who made it? Writers Kirsten Beyer and Mike Johnson, artist Tony Shasteen, and colorist JD Mettler.
When does it take place? The frame story takes place after the events of “The Battle at the Binary Stars.”
Who is it for? Anyone who wants to learn more T’Kuvma about Discovery-era Klingons.

IDW Publishing’s first Star Trek: Discovery comic book dove into the origin of T’Kuvma. The Klingon religious leader set off the Federation-Klingon war that played out through Discovery’s first season. The Light of Kahless reveals what brought him to that point.

What is it? A comic
Who made it? Writers Kirsten Beyer and Mike Johnson, artist Angel Hernandez, and colorist Mark Roberts.
When does it take place? After Discovery returns home from the Mirror Universe.
Who is it for? Fans of the Mirror Universe, anyone wanting a Star Trek story where almost anything can happen.

We won’t say much more than that, but the series goes places you may not expect. It reveals fun new details about the Mirror Universe and surprises like almost no other Star Trek comic book. We’re hoping Succession gets a direct sequel soon.

What is it? A novel
Who made it? Author Uma McCormack
When does it take place? The frame story take place after the first season’s finale. Tilly recalls events from before she enrolled in Starfleet Academy.
Who is it for? Fans of Tilly, anyone looking for an unconventional Star Trek story.

Remember in the episode “Project Daedelus?” Remember when Tilly stammers at Admiral Cornwell about she’s never been in trouble with the law except for a rebellious phase when she was 16? The Way to the Stars covers that rebellious phase.

What is it? A novel
Who made it? Author John Jackson Miller
When does it take place? During Star Trek: Discovery‘s first season.
Who is it for? Anyone hoping Captain Pike gets a spinoff.

The Enterprise and its crew were welcome additions to Discovery’s second season. Still, some fans couldn’t help but wonder where the ship was during the war with the Klingons. The Enterprise War answers those questions. In doing so, it chronicles the Enterprise’s year spent with its crew fractured and trapped in a nebula torn apart by a war of its own.

Also, The Enterprise War also reveals the secret origin of Spock’s beard and other secrets hinted at in Discovery’s second season. The season two portrayals of Pike, Spock, and Number One in Discovery helped inform the novel. That makes it perfect for anyone looking to spend more time with those characters.

What is it? A comic
Who made it? Writers Kirsten Beyer and Mike Johnson, artist Tony Shasteen.
When does it take place? After Discovery‘s jump in the show’s second season finale.
Who is it for? Anyone dying to know what happens next.

As exciting as Discovery’s jump into the future for its third season is, it did leave some unfinished business in the 23rd century. That’s where Star Trek: Discovery: Aftermath comes in.

The series is set after Discovery’s jump but before Spock’s return to duty. It sees Pike working with L’Rell to turn the current Federation-Klingon armistice into a lasting peace. It turns out there are some who prefer war to peace.

Star Trek: Discovery: Aftermath is essential reading for anyone invested in Discovery’s vision of the 23rd century.

What is it? A video game
Who made it? Cryptic Studios
When does it take place? After all canon Star Trek series to date except.
Who is it for? Anyone who wants to be the star of their own Star Trek series.

We’ve covered all the books and comics, but if you enjoy video games then it’s worth giving Star Trek Online a look. Cryptic Studios began introducing Star Trek: Discovery content with the Age of Discovery expansion. You can now create a new character from the era of Star Trek: Discovery and then travel into the future to play through the bulk of Star Trek Online’s content. Even if you create a future character, time travel and historical holodeck programs allow you to play trough of Age of Discovery’s story.

The story plays out over three expansions. Age of Discovery pits the player against T’Kuvma’s sister J’Ula and her team of time-displaced Klingons. Mirror of Discovery brings Mary Wiseman in to voice the Mirror Universe’s Tilly, aka Captain Killy. Rise of DIscovery reveals what happened to the Buran and Prime Lorca.

Star Trek Online isn’t stopping there. The latest update, Awakening, sends players into the mycelial network and features Anthony Rapp as a hologram of Stamets. If you’re looking to go on your own Star Trek adventure, get into Star Trek Online.