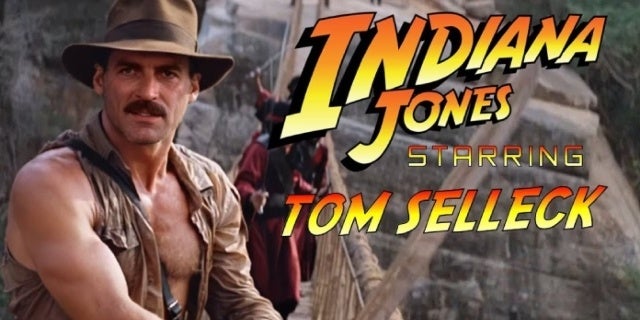 For many, Harrison Ford’s Indiana Jones is one of the most iconic film performances in recent decades. Prior to Ford landing the role, director Steven Spielberg and writer George Lucas had considered a much different actor to take the role — Magnum P.I. star Tom Selleck. Selleck ultimately went as far as screen-testing for the role, but was not able to take it due to his contract with the aforementioned series. While we never got to see Selleck embody the character, a new “deepfake” video is probably as close as we’re going to get. The video, which is courtesy of Youtuber Sham00K, superimposes Selleck’s face on top of Ford’s performance – and the result is both mesmerizing and a little uncanny.

While the video shows that Selleck arguably works as Indiana Jones, many regard the idea of another actor portraying the original character to be a little blasphemous. Comments from Ford have certainly added to that sentiment, as the actor joked that the role essentially begins and ends with him.

“Nobody is going to be Indiana Jones,” Ford said in an interview this past May. “Don’t you get it? I’m Indiana Jones. When I’m gone, he’s gone. It’s easy. This is a hell of a way to tell Chris Pine this. I’m sorry, man.”

While that certainly sounds ominous, there’s a very good chance that fans will get to see Ford play the role again, with a fifth Indiana Jones movie currently in the works. The film will see Spielberg and Ford returning and is expected to film in 2020 after some delays.

“It’s always worth the trip when I get to work with this deep bench of talent coming out of the UK,” Spielberg said in a 2018 appearance. “The actors, and the crew, the chippies, the sparks, the drivers — everybody who has helped me make my movies here, and will continue helping me make my movies here when I come back… to make the fifth Indiana Jones movie right here.”

“I would love to return,” Karen Allen, who portrayed Marion Ravenwood in the franchise, said in late 2018. “and I think that there’s a plan to shoot a fifth and possibly final one–at least in the incarnation of it being done by Steven and Harrison–and I’m very hopeful that I’ll be part of it.”

What do you think of this Tom Selleck/Indiana Jones deepfake video? Share your thoughts with us in the comments below!