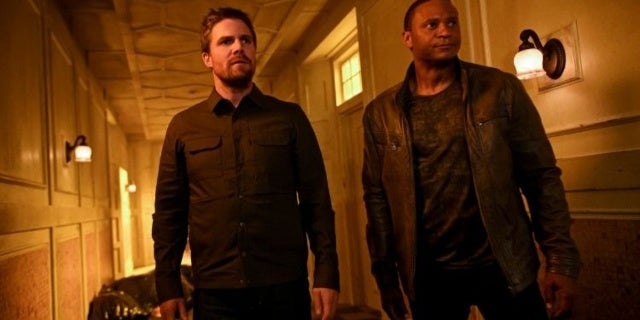 As fans learned last week, Oliver’s currently on a multiversal trip hunting down McGuffins for the Monitor. At the tail end of last week’s episode, Earth-2 started dissolved right in front of Oliver, Diggle, and Earth-2 Laurel. The three got out just in the nick of time and this week’s episode, “Welcome to Hong Kong,” takes place immediately after. As always, full spoilers up ahead.

The episode kicks with a pretty big reveal — the Monitor razed Earth-2 because Oliver didn’t follow his exact instructions. This leads to a massive confrontation between Oliver and Laurel, leading the latter to leave her two Earth-1 friends. It’s revealed the Monitor has another mission for Oliver — he needs to track down a Dr. Robert Wong and take him to the interdimensional being. During Oliver and Diggle’s first stop to track down Dr. Wong, the two bump into Tatsu Yamashiro, and she agrees to help them.

Elsewhere, Laurel teams up with Lyla to track down a techie to try fixing Cisco’s breach device. Once it’s fixed, it’s confirmed Earth-2 has been destroyed, much to Laurel’s dismay.

Oliver, Diggle, and Tatsu keep trying to find Wong but keep bumping into members of the Triad. Before long, they find out the professor has gone AWOL after successfully recreating the Alpha-Omega virus. Oliver takes the virus in hopes of luring out the captives of Wong, a group shown to be led by China White. At their meetup, Oliver tires convincing China of the impending crisis, but she takes the virus anyways.

As she exchanges Wong for the virus, China White realizes she and her group have been set up by Oliver, who has Diggle and Tatsu waiting in the shadows. During the ensuing fight, Lyla and Laurel show up to help them take out China White and her cronies, returning the virus to safe hands.

After things calm down, it’s revealed Lyla’s been working with the Monitor this entire time behind Oliver’s back.

In the future, Connor, Zoe, and Mia track down JJ to try working things out, something that leads to a heart-to-heart between Connor and JJ. While the groups are meeting, William uncovers a more sinister plot of JJ and the Deathstroke gang — it’s their plan to take over Star City. Without any defenses, the Deathstroke gang raids the Team Arrow bunker and takes William Captive.

Arrow airs Tuesday nights starting at 9/8c on The CW.