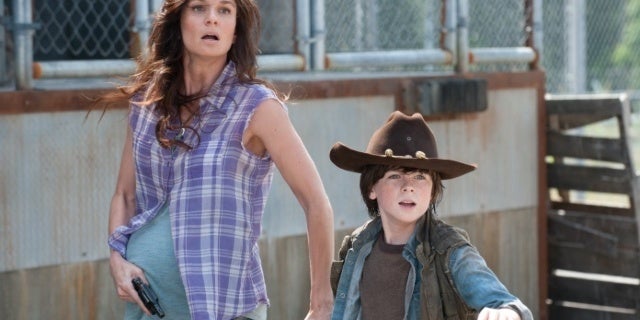 Showrunner Angela Kang previously revealed cast and crew “teared up” when Fleming joined in Season 9, first appearing in the six-year time jump that followed the disappearance of Judith’s adopted father Rick Grimes (Andrew Lincoln). “She looked so much like Sarah Wayne Callies,” Kang told EW. “There’s a resemblance to Chandler, who played Carl. That’s really been a bright spot for us in making this season.”

Callies later said Lori, who died giving birth to Judith in Season 3, would be “super grateful” to Rick and Michonne (Danai Gurira) for raising the girl despite no blood connection. Rick once admitted he knew Judith is the daughter of Shane (Jon Bernthal), his former best friend and police force partner.

“I’m sure you guys have all heard this — I never watched the show, zombies scare me, I’m sorry,” Callies said aboard Walker Stalker Cruise earlier this year when asked how Judith might be different if Lori had survived to raise her. “I’ve also said for years when people go, ‘Who’s Judith’s father?’ I have an adopted son. I am his mother. I don’t care whose DNA… Rick Grimes stepped up to raise that girl, and that is her father.”

“Now, similarly, while I would like to believe that Lori’s sacrifice for Judith is a little bit like Harry Potter’s mom dying to save his life and gave him superpowers and a cool scar, Michonne is that girl’s mom. Because she raised her,” she continued. “And so I can’t tell what would be different if Lori was still alive, but I think Lori is up there somewhere — or down, whatever — she is super grateful that in a world that broken, two human beings stepped up to make sure a little girl survived.”

It remains to be seen who acts as caretaker of the Grimes children when Gurira’s Michonne exits the show in the ongoing Season 10.

“I was really, really happy with the way that she leaves the show,” Fleming recently told ET Live of Michonne’s exit. “I think that they did it really well and everybody did a very good job with her exit. I’m excited.”

TWD chief content officer Scott Gimple has since hinted Gurira could rejoin Lincoln in the franchise’s first movies, where Rick might reunite with children Judith and RJ (Antony Azor).