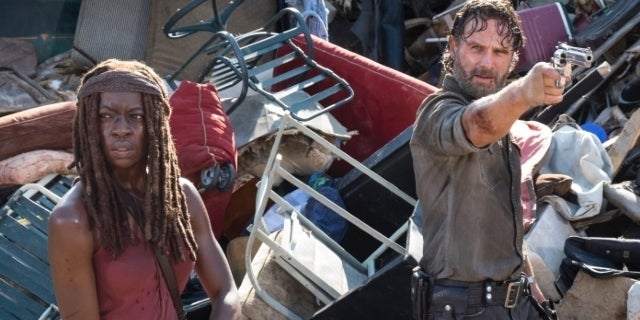 When The Hollywood Reporter acknowledged movie star Gurira — a big draw after her appearances in Marvel Studios’ Black Panther, Avengers: Infinity War and Avengers: Endgame — “has to participate” in the Walking Dead movies, Gimple said, “Oh yeah, absolutely. I mean, you just laid it out.”

“I would say even if she happened not to be a movie star, that would be the case,” Gimple added. “I remember sitting in Black Panther at the premiere and watching her as Okoye, and just sort of sinking into my chair and being like, ‘Oh my God, Danai is a movie star.’ I think she blew away everybody on the screen. She’s always blown us away, but she was our little secret with 17 million people. Now the secret’s out.”

How Michonne exits the series remains a closely guarded secret. But the movie, now being developed by Gimple and Walking Dead creator Robert Kirkman, promises to boast more spectacle than any episode of the television show.

“I just think it makes sense. We want to do a theatrical expression of The Walking Dead,” Gimple said. “That is something that feels like a movie, because we’ve been making little movies for years and years and years, and we know that we can have great stories to tell on the screen. And Rick-slash-Andy give us that opportunity to start out of the gate in a really amazing way.”

“Well, we are going to be doing some creative things with the order in which we write and shoot things so that she’s sort of woven in a little bit,” Kang told Deadline earlier this year. “With Black Panther, Avengers and plays of her own and everything, I think Danai obviously is having an amazing career moment. She’s like an international treasure.”

Kang continued, “So we’ve kind of known that she would have a reduced role this coming season. We’re excited to tell a nice, meaty story with her for Season 10 regardless, I can tell you. I’m also so thrilled with all the great attention she’s gotten for the work she’s done on the show this year. Danai is not only an amazing athlete and warrior on the show, but she’s such an incredible dramatic actress too in my opinion.”

“I was really, really happy with the way that she leaves the show,” Fleming told ET Live. “I think that they did it really well and everybody did a very good job with her exit. I’m excited.”

Gimple has since said the first Walking Dead movie will largely stand alone and will appeal to a broad audience, including those unfamiliar with the ten-season zombie drama.

Star Wars: The Rise of Skywalker Now Has the Worst Rotten Tomatoes Score of the Saga
Oscar Isaac To Star In And Produce Ex Machina Adaptation The Great Machine
Sonic the Hedgehog Movie Shares New Character Posters
Whisper of the Heart Gets Live Action Movie Adaptation!
Crisis on Infinite Earths Showrunner Speaks Out on the Next CW Crossover