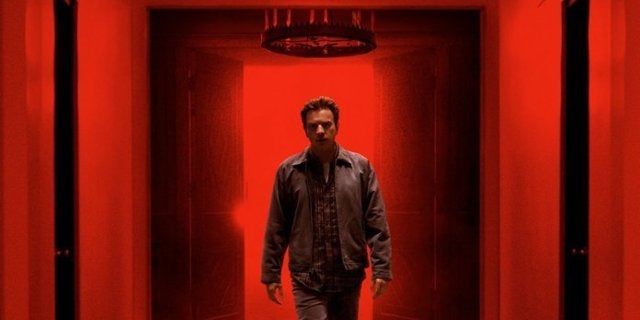 The upcoming Doctor Sleep serves as a continuation of the events of Stephen King‘s The Shining, with the film’s newest posters leaning heavily into iconography from that narrative to entice audiences. King’s original novel debuted in 1977 and was adapted into a film in 1980, in addition to a miniseries in 1997, with the Doctor Sleep novel hitting shelves in 2013. This new film has the difficult task of being not just an adaptation of the novel, but also serving as a continuation of the 1980 film, as the two storylines feature different conclusions. The film’s posters, however, want to make it quite clear that this new film is a sequel to one of the most iconic horror films of all time.

The poster sees an adult Danny Torrance, played by Ewan McGregor, walking down the halls of the Overlook Hotel towards his younger self sitting in a tricycle. This mirrors the sequence from Stanley Kubrick’s The Shining adaptation in which the young character entertains himself by riding through the empty hotel, only to encounter a variety of unsettling spirits.

The other new poster manages to embrace not only an iconic sequence from the Jack Nicholson-starring Shining, but also its marketing campaign.

The placement of McGregor’s face on the poster mirrors the scene in The Shining when Jack Torrance smashes a door with an ax to get to his wife Wendy, managing to only fit his face in the hole while famously shouting, “Here’s Johnny!” Trailers for Doctor Sleep have already depicted a similar sequence, with the above poster’s yellow and black color scheme mimicking the posters for the original film, which also stuck with starkly contrasting text for a minimal design.

In the film, “Still irrevocably scarred by the trauma he endured as a child at the Overlook, Dan Torrance has fought to find some semblance of peace. But that peace is shattered when he encounters Abra, a courageous teenager with her own powerful extrasensory gift, known as the ‘shine.’ Instinctively recognizing that Dan shares her power, Abra has sought him out, desperate for his help against the merciless Rose the Hat and her followers, The True Knot, who feed off the shine of innocents in their quest for immortality.”

Check out Doctor Sleep when it lands in theaters on November 8th.

Are you looking forward to the new film? Let us know in the comments below or hit up @TheWolfman on Twitter to all things horror and Star Wars!