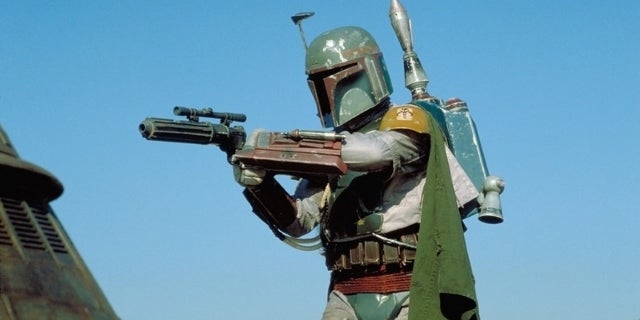 Despite only having a small role in Star Wars: The Empire Strikes Back and Star Wars: Return of the Jedi, Boba Fett is considered one of the most iconic characters in Star Wars history. The bounty hunter is a fan favorite, and thanks to the official Star Wars account on Twitter, fans are getting a closer look at his original design. A recent tweet shows Joe Johnston’s original concept art for the character, which isn’t too far off from what came to life on the big screen.

Joe Johnston’s original concept art drawings for Boba Fett give insight into the design process of the character. (Watch out for those boot spikes, Han Solo.) pic.twitter.com/ig0PmgpNdc

“Joe Johnston’s original concept art drawings for Boba Fett give insight into the design process of the character. (Watch out for those boot spikes, Han Solo.),” they wrote.

“Not too dissimilar,” @GreyJediRyan pointed out.

“Please don’t just throw him away. There’s so much more he could be, and it’s bad enough that George treated him the way he did,” @ConradTheGreat1 pleaded.

While Boba Fett’s backstory was explored in Star Wars: Attack of the Clones, there are no current plans to bring the character back. However, another character will soon be rocking the famous Mandalorian armor. Star Wars: The Mandalorian will be premiering on Disney+ in November, and will see Pedro Pascal as the titular bounty hunter, who travels the outer reaches of the lawless galaxy, surviving as a mercenary-for-hire. The series is set shortly after the events of the original trilogy of films and is expected to have a unique approach on the franchise. The cast also includes Gina Carano, Carl Weathers, Giancarlo Esposito, Nick Nolte, Omid Abtahi, Emily Swallow, Werner Herzog, and Taika Waititi as the voice of IG-11.

Other upcoming Star Wars shows include one starring Ewan McGregor as Obi-Wan Kenobi and a prequel to Rogue One: A Star Wars Story starring Diego Luna as Cassian Andor and featuring Alan Tudyk as K-2SO.

Star Wars: The Mandalorian premieres on Disney+ on November 12th.