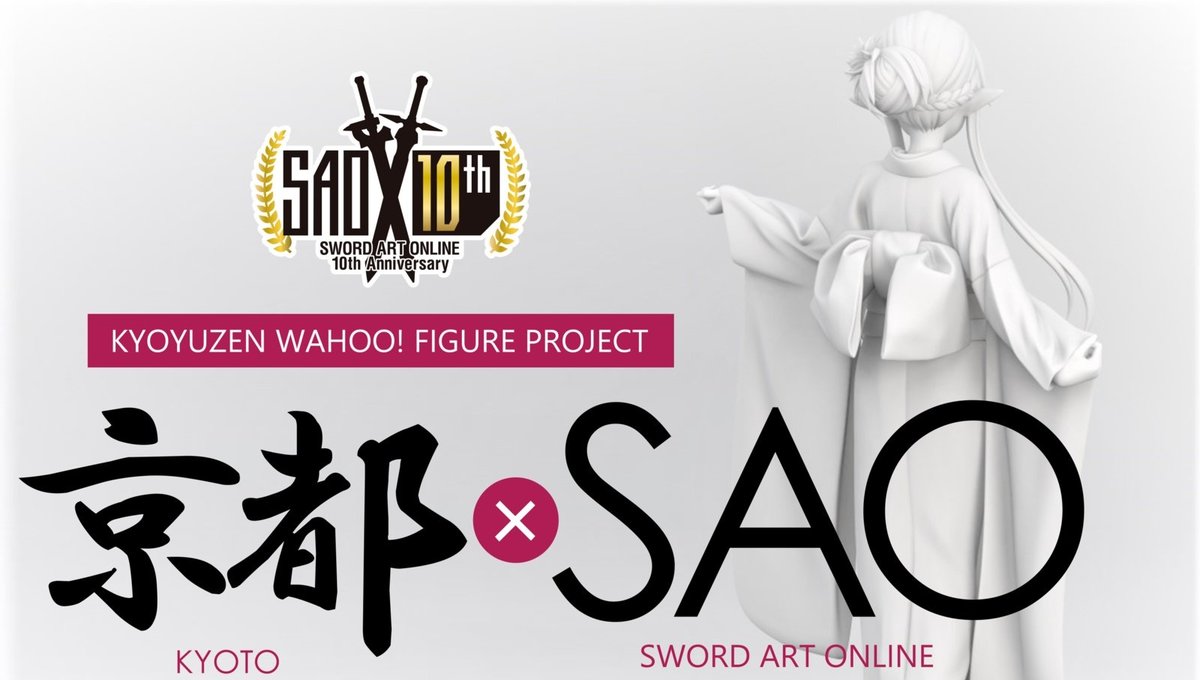 – What are your impressions of this project?

Chiaki: At Knead we’ve already handled several kimono figures and are currently in production with orders from other companies, but I think this one is a little different. We often use sample images and illustrations as a reference, but using D4A’s scan data as a reference to replicate “patterns” and “etiquette” is a completely fresh approach.

Wotakumito: We’re sculpting Asuna, so the first priority is reproducing her based on settings and images. It all starts from there. To create the main body, we looked at the pose taken by the model in the scan and then finally began referencing the kimono data to add the kimono to the figure in parts.

So that we wouldn’t have to go back and fix it later, we tried to keep the characterization in mind from the beginning. We might have been thinking that because we had the scan data from the neck down all we needed to sculpt was the head, but as the head body/balance was wrong and it wasn’t quite “Asuna” we decided not to focus on the kimono data in the beginning.

– Any highlights from producing the kimono?

Wotakumito: The belt fastening. I think we pulled that off beautifully. Naturally, the figure looks good as a whole. It’s a part we haven’t been able to reproduce before with our kimono figures.

Another thing is putting it together. In addition to recreating the authentic feel of the kimono layers, reproducing the feeling of lightness and heaviness from the scan data, it’s really convincing as a whole so you can’t follow the parts just using your imagination. Also, we were careful not to overdo it with bringing the SAO worldview together with something more real.

– Any highlights in the sculpting?

Wotakumito: Of course, there’s the head, but this time we’re also making the “Undine” version of Asuna so she has wings on her back. There aren’t any other kimono figures with wings, so that’s the kind of luxury that you only get with SAO. We approached it knowing that the impact of the figure with its blue hair, pointy ears, and wings on the back was something unique to this Asuna. I’ll say it quietly, but there are a lot of highlights with this figure so definitely pick it up and see for yourself.

– How did you finish up the prototype?

Chiaki: Since the story of SAO itself switches between virtual reality and the real world, I feel that I was able to reproduce a similar composition in the world of figures through the challenge of fusing reality with the character. The prototype will be on display at Kyomaf on Sep. 21, so please come out and see it in person!

– Your impressions of this project?

Tomikawa: I was approached by Kyoka. Anime is a world I was completely unfamiliar with, but it’s one in which the heroine transcends dimensions and fights for love and self-actualization. I was very moved by that. I’d never had an offer like this before but decided to accept because I was filled with emotion listening to Asuna and Yuki’s conversations. I’m really happy and grateful that I was able to participate in this project.

– Could you tell us a little about the design concept?

Tomikawa: My favorite motifs are water, air, and space. My favorite color is blue too, so the perfect Asuna design just came naturally. From the nine rough sketches I prepared, I decided on the first one that came to me featuring waterlilies and swirls.

The design has a blue water theme. With the strength of the large white waterlilies and small flowers it has an elegant cuteness. Also, adding the motif of Asuna’s sword to the pattern, the combination of beauty and bravery, shows Asuna’s wisdom. It tightens the whole and brings more harmony to it. In the language of flowers, waterlilies mean “purity” and “innocence.” Folklore around the world features water nymphs by other names and I think they suit Asuna.

– And what about the process?

Tomikawa: Around 15 specialists were involved between the design and completion. Among them, traditional craftsmen involved with the gluing, brush dying, and gold leaf.

For the gold foil we asked for high grade foil for the details. The blue-green foil of the sword brings out the shading.

The completed kimono features the author’s signature as well as a dedication (the name of the person the kimono is made for) on the front at the bottom right. This kimono features my alias, “Arisa,” and as this is the only kimono made for Asuna in the world, I inscribed it “for Asuna” with that in mind.

– The Tegaki Kyoyuzen will be unveiled at Kyoto International Manga Anime Fair on Sept. 21.

Tomikawa: Praying that this kimono would be completed safely, I made an offering at the Kurumazaki-Jinja Shrine (dedicated to the gods of the arts) by writing my name on the red tamagaki. I’m so happy that Haruka Tomatsu in the role of Asuna will stand on the stage at Kyomaf wearing her kimono. I’m going to see her on the big day too. I’m really looking forward to the figure’s announcement – considering it’s going to be displayed on stage and in the exhibition, it’s turned out really well.

– What is a “traditional craftsman”?