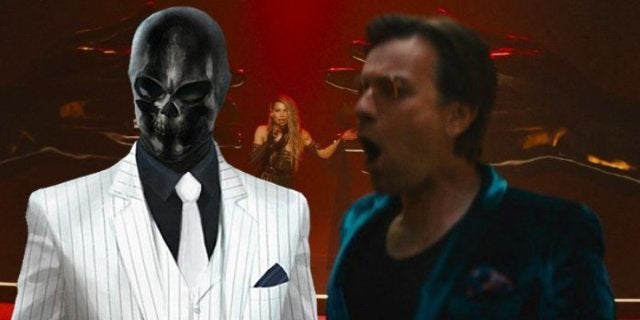 DC may end 2019 with a big win for its Joker movie, but the studio is really gearing up for a big run in 2020. DC’s 2020 slate will be all about the ladies, with the much-hyped summer sequel Wonder Woman 1984, and the highly-anticipated debut of DC’s Birds of Prey. We’ve now gotten the first official teaser footage for Birds of Prey, plus an official poster. That’s not much, but it’s certainly been enough for DC fans and trolls alike to form some immediate (snap?) judgements about the film. One of the earliest targets of fan rancor? Ewan McGregor’s take on the character of Roman Sionis, aka Black Mask!

Scroll below for a sampling of what DC fans are saying about McGregor’s version of Black Mask in Birds of Prey (and the Fantabulous Emancipation of One Harley Quinn)!

The poster is cool….but Ewen ISN’T wearing a Black Mask and it’s pissing me off. #BirdsOfPrey https://t.co/r1XkTLDck7

The fact that Birds of Prey has debuted imagery of Black Mask – without actually featuring the signature black mask – immediately got a certain sector of DC fans riled up.

Congrats @WBHomeEnt @wbpictures for that shit. What to expect from a company that doesn’t respect fans and characters? pic.twitter.com/BlizV10O2C

It’s literally the exact same costume except the shirt and the mask…….. https://t.co/cYf2OXB4bL

Ewan McGregor’s Black Mask performance may have had slightly concerned, based on the Birds of Prey trailer, but the poster image has sealed the “controversy” for some. For others, the poster is simply teasing a version of Roman Sionis that hasn’t yet gone full Black Mask.

Are you sure? Do you know who the Black Mask is? pic.twitter.com/SLaXMngbA1

Other DC fans are bringing out the receipts to prove that whatever is going on with McGregor in these Birds of Prey promo materials, it is still not a proper fit for who and what Black Mask is.

Im curious if @AngryJoeShow knows of the leaked plot for this wonderful movie. Black Mask is flamboyantly gay (has crush on Zsasz) and is pissed Cassandra Cain stole his dick pics which are in a diamond. Also Harley will narrate it breaking the 4th wall

One things that seems to clearly be influencing the discussion about Ewan McGregor’s Black Mask performance in Birds of Prey are those rumored script leaks about the film. As you can see above, those leaks paint a very… different kind of picture for who Black Mask is, and it is not anything that fans would expect.

The DC movie franchise hasn’t had a very beloved or celebrated track record when it comes to adapting characters for the movie screen – certainly not in the case of villains. Lex Luthor and Joker were two very big misses for the franchise, and some fans are beginning to feel that Black Mask is going to be the next big miss.

This is beyond parody. Can’t believe I’m saying this, but Birds of Prey could make Suicide Squad look like The Dark Knight in comparison pic.twitter.com/iaFSlPnZvz

Whether justified or not, Birds of Prey causing fans to doubt that it could be better than Suicide Squad is a horrible Public Relations shadow that the film now has to escape from under.

Also: that Black Mask? Dude, I wanted him to be deadly killer who sells girls. I wont surprise if that movie will be another “weak movie with great cast”. pic.twitter.com/avyRZU36Ue

This fan isn’t just complaining about what she doesn’t like – she (and a lot of other fans) have a clear indication of the version of Black Mask they wanted to see onscreen.

Some fans are already beginning to turn on Margot Robbie’s Harley Quinn for this and many other problems with Birds of Prey. As they see it, Harley isn’t a true piece of the Birds of Prey brand (in the comics its a team of Gotham City Heroines only…), and therefore spinning this film in her direction is bending if not breaking DC Comics continuity.

I’m going to get so much hate for this but I’m just going to say it. Those that think that Birds of Prey will be bad because Black Mask might not have his Mask need to stop being dramatic. 🤷🏾‍♂️

Ps. Roman will have the mask in Birds of Prey pic.twitter.com/cDmhhPcaAt

Some DC fans never let their hopes get dragged down, and this fan is keeping that spark alive with some level-headed prediction that Birds of Prey *will* give us the Black Mask we want and deserve, once the full film is out for fans to see.