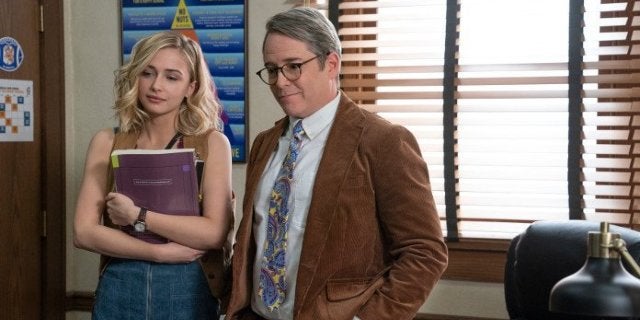 Netflix has released a new trailer for the upcoming post-apocalyptic comedy series Daybreak, starring Matthew Broderick. Based on the comics by Brian Ralph, Netflix says in a press release, “In this post-apocalyptic, genre-bending series, the city of Glendale, California is populated by marauding gangs of jocks, gamers, the 4-H Club, and other fearsome tribes who are kicking ass as they fight to survive in the wake of a nuclear blast (on the night of Homecoming…ugh). Following an eclectic group of survivors as they navigate this strange and treacherous world, Daybreak is part samurai saga, part endearing coming-of-age story, and part Battle Royale. This Generation A series (A for Apocalypse! Get it?) is rated TV MA.

“It feels like to survive high school you need a tribe, and to survive the apocalypse you need a tribe,” Coleite told Entertainment Weekly. “That’s how we get through this: with our friends…[The show has] this optimistic view of the end of the world. It immediately transported me back to high school and feeling like, ‘Man, I would love it if the world ended right now because I could totally reinvent myself. I could be anybody else.’ And I think that that’s a really common thing that a lot of us felt in high school.”

The series is based on the Daybreak graphic novels by Brian Ralph, which he began publishing in 2006. The comic will get a hardcover re-release in October to coincide with the show’s Netflix debut. Publisher Drawn & Quarterly describes Daybreak as “The Road meets Dawn of the Dead,” and says it draws “inspiration from zombies, horror movies, television, and first-person shooter video games, Daybreak departs from zombie genre in both content and format, achieving a living-dead masterwork of literary proportions.”

Are you excited about Daybreak? Let us know in the comments. Daybreak debuts on Netflix on October 24th.