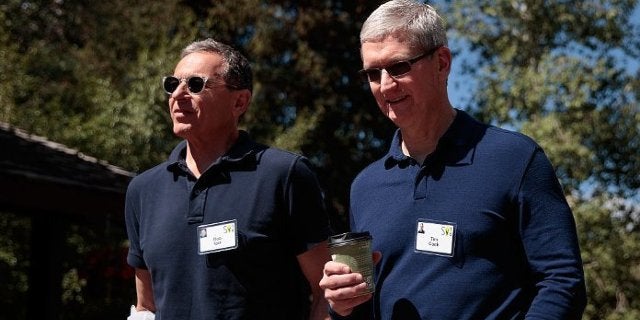 Disney CEO Bob Iger has resigned from Apple’s board of directors according to Apple’s filing with the Securities and Exchange Commission (via The Hollywood Reporter). Iger stepped down from his position on September 10th, the same day Apple revealed new Apple TV+ details. “I have the utmost respect for Tim Cook, his team at Apple and for my fellow board members,” Iger said in the statement. “Apple is one of the world’s most admired companies, known for the quality and integrity of its products and its people, and I am forever grateful to have served as a member of the company’s board.”

Apple released the following statements in regards to Iger’s departure: “Bob has been an exemplary board member for nearly eight years, and for as long as he has led Disney he has been one of Apple’s most trusted business partners. He is a dedicated, visionary CEO and a role model for an entire generation of business leaders. More than anything, Bob is our friend. He leads with his heart and he has always been generous with his time and advice. While we will greatly miss his contributions as a board member, we respect his decision and we have every expectation that our relationship with both Bob and Disney will continue far into the future.”

Neither Apple nor Iger gave an official reason for his departure. It likely has to do with Apple and Disney coming into direct competition in the streaming arena in November. Apple will launch Apple TV+ November 1st with a $4.99 per month subscription rate. Disney+ will launch on November 12th at $6.99 per month.

Apple TV+ will launch with a library of original programming, including Jason Momoa’s sci-fi drama See. Other shows available at launch include the Hailee Steinfeld-led Emily Dickinson-based period piece Dickinson, sci-fi drama For All Mankind, a reboot of Ghostwriter, educational program Helpsters, the dramedy The Morning Show, the Snoopy in Space cartoon, and Oprah’s Book Club.

Disney+ will lean on Disney’s library of pre-existing intellectual properties. Original programming available at launch includes Star Wars: The Mandalorian, Forky Asks a Question, SparkShorts, Marvel’s Hero Project, High School Musical: The Musical: The Series, Encore!, The Imagineering Story, and The World According to Jeff Goldblum. It will also launch with Disney’s live-action remake of the film Lady and the Tramp.

What do you think of Bob Iger resigning from the Apple board of directors? Let us know in the comments.