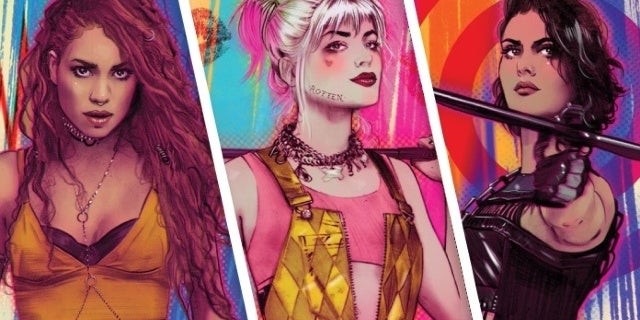 We still have to wait until February to see Birds of Prey (and the Fantabulous Emancipation of One Harley Quinn), but DC Comics is helping fans prepare for the upcoming film in a pretty epic way. As part of DC’s December 2019 solicitations, the company officially announced three new trade paperbacks, each of which will collect a past run of comics specific to one of Birds of Prey‘s main characters.

Each of the covers will be adorned by a new movie-centric cover, which is created by fan-favorite artist Tula Lotay. The covers arguably reveal the best look yet at Birds of Prey‘s Black Canary (Jurnee Smollett-Bell), Harley Quinn (Margot Robbie) and Huntress (Mary Elizabeth Winstead), after the trio were showcased in the film’s costume teaser and teaser trailer.

This is just the latest special cover that Birds of Prey has received, after Joelle Jones created a take on the film’s entire ensemble (including Renee Montoya and Cassandra Cain) for the Harley Quinn and the Birds of Prey trade paperback.

Scroll through to check out the covers, as well as their accompanying solicitations.

BIRDS OF PREY: BLACK CANARY TP
written by BRENDEN FLETCHER
art by ANNIE WU, PIA GUERRA, SANDY JARRELL, and MORITAT
cover by TULA LOTAY
Rock star. Public menace. Martial artist. Superhero. Dinah Drake is all these things and more—and she’s got the legions of fans, friends, and foes to prove it. But there’s a part of her life she’s never been able to get a handle on, a role she’s never been able to play: daughter. Her mother went missing, and took the secrets of Dinah’s own past with her. Now a mysterious cult is determined to dig them up, and Dinah must go on a whirlwind tour from Gotham City to the nightclubs of Europe. Collects Black Canary #1-12 and Black Canary Sneak Peek #1.
ON SALE 01.15.20
$19.99 US | 288 PAGES
FC | ISBN: 978-1-4012-9891-3

BIRDS OF PREY: HARLEY QUINN TP
written by AMANDA CONNER and JIMMY PALMIOTTI
art by CHAD HARDIN and STEPHANE ROUX
cover by TULA LOTAY
When Gotham’s favorite sociopath inherits a building on the famous Coney Island boardwalk, she feels right at home in the (literal) freakshow. Unfortunately, the legion of bounty hunters after the price on her head seem to know it, too. Who else but Harley Quinn could handle all that Brooklyn’s criminal underbelly has to offer—Russian spies, senior citizens, and rival roller derby teams included—and still have time for a double chili dog! Collects Harley Quinn #1-7 and Harley Quinn: Future’s End #1 and a story from Secret Origins #4
ON SALE 01.22.20
$19.99 US | 208 PAGES
FC | ISBN: 978-1-4012-9892-0

BIRDS OF PREY: THE HUNTRESS TP
written by GREG RUCKA
art by RICK BURCHETT
cover by TULA LOTAY
In these stories from Batman/Huntress: Cry for Blood #1-6, the Huntress is framed for murder, and while avoiding the G.C.P.D. and the Bat-Family, she revisits her childhood in hope of discovering the true culprit. But as she and the Question seek clues to prove her innocence, more murders implicating her are committed, forcing Batman and Nightwing to confront her in a showdown with unexpected results!
ON SALE 01.01.20
$16.99 US | 152 PAGES
FC | ISBN: 978-1-4012-9890-6