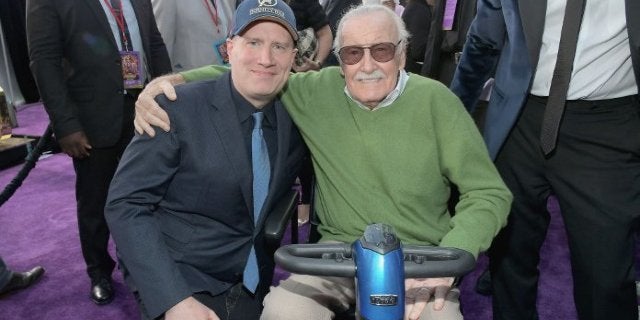 At last night’s 45th annual Saturn Awards presentation, Kevin Feige accepted the inaugural Stan Lee World Builder Award. The award is named for one of the chief creative forces behind the Marvel Universe, who passed away last November. The Academy of Science Fiction, Fantasy and Horror Films, which hosts the Saturn Awards, says the Stan Lee World Builder award “will be given annually to the creative force who has, over an extended period of time, created a world with multiple stories and characters that have amazed and engaged fans worldwide at the most galactic level.” It seems appropriate that the first of these awards go to Feige. As president of Marvel Studios, Feige made Lee’s dream of seeing his co-creations and their shared universe into a reality. During Feige’s pre-taped acceptance speech, he shared a sweet story about Lee that took play while filming one of Lee’s now-famous cameo scenes.

“I’m incredibly humbled that I’m receiving an award named after a man who can only be described as a genius,” Feige said. “Stan was incredibly proud of the MCU cameos. I would remind him that he also co-created all these characters and he’d sort of brush that off and go, ‘Yes, but these cameos!’ I remember one time he was going to shoot soon after lunch and just before lunch I look around and the crew’s not there and I realized they’ve all gone down to the comic shop to buy comics for Stan to sign. And If you’ve met Stan you know that, of course, he stayed there and he signed every one and he talked to each member of the crew. He was infused with humanity and kindness. He put that into every creation he had, which is why they all still resonate today and will resonate, I believe, for centuries to come.”

What do you think of Feige’s story about Stan Lee? Let us know in the comments section.