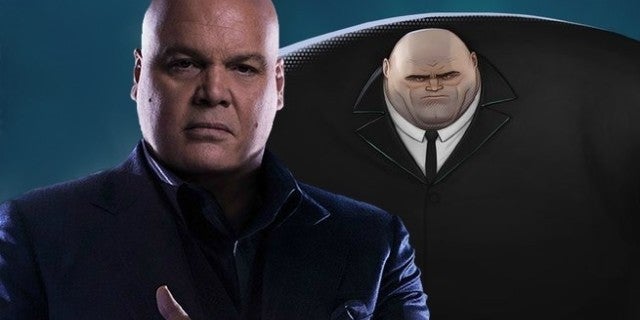 Spider-Man: Into the Spider-Verse might be out of theaters, but fans still love the property and are hoping for more adventures. One fan on Reddit decided to have some fun with two very different Marvel series by mixing the Netflix Daredevil series with Spider-Verse. The image takes Vincent D’Onofrio’s take on Kingpin and makes him the big wall of man that menaces his way through that Spider-Man film.

D’Onofrio was one of the major highlights of the now concluded Netflix Defenders shows. His Kingpin always kept viewers on edge every time he walked on screen. Its strange to watch the clip now, as Daredevil is no more and none of the Defenders characters will get a chance on the small screen for some time. But, Spider-Verse will avoid that fate because of a sequel already in development.

V A N E S S A from r/Defenders

Another film centered around Shameik Moore’s Miles Morales was given the go-ahead last November. Joaquim Dos Santos of Avatar: The Last Airbender and Voltron: Legendary Defender fame is slated to lead the project. Even though she just signed on for some Disney+ action, another spinoff led by Hailee Steinfeld’s Spider-Gwen is also on Sony’s radar for the future. There are also some TV series that have been announced already. Phil Lord and his team have to be loving that everyone enjoyed their work to this degree.

“Look, we wanted to make a movie that felt like it was the tip of the iceberg,” producer Phil Lord told ComicBook.com a while back. “You could imagine all of these other things. So it’s music to our ears that people could imagine a Spider-Noir film, and the Spider-Ham insane cartoon.”

“Right. We still have the horse,” Chris Miller co-signed. “We’ve got to put the cart behind it. So we’ll let it ride down the road a few blocks before we get too big for our britches.”

The original’s post-credits scene certainly left the door open for more space/time shenanigans with Oscar Isaac voicing Miguel O’Hara, the Spider-Man of 2099. Miller was careful to avoid tipping the creative team’s hand about their ideas for a sequel last year. Could we see the Scarlet Spider or even the Spider-Man from last year’s smash hit PlayStation 4 game? The door is open for everything. Still, there is a breadth of characters at their disposal for another trip through the Spider-Verse.

“I think there’s a bunch [of possible characters], and I don’t want to say too much because there’s a wide breadth of characters that are coming out of the Spider-Man universes now.” Miller told ComicBook.com of other potential characters that could be introduced. “And it’s really fun to be able to sort of think about plucking ones that you haven’t seen before or have something interesting thematic to say.”