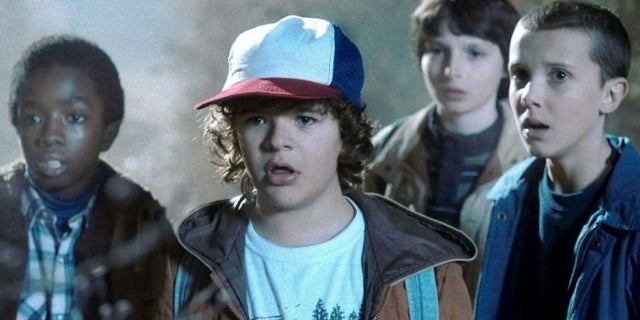 Want to feel old? Some of the young cast members of Netflix’s Stranger Things are already driving! Gaten Matarazzo, the actor best known for playing Dustin Henderson, may play a middle schooler on the small screen, but this week marked the actor’s 17th birthday. Matarazzo celebrated by posting a photo of his license and was met with many responses from his castmates.

“Did it! Also yes I reposted with my info blocked out because I’m stupid and didn’t do it before👍,” Matarazzo wrote.

“UR SO LUCKY,” Noah Schnapp (Will Byers) wrote.

Believe it or not, Matarazzo isn’t even the oldest of the young cast members. Caleb McLaughlin (Lucas Sinclair) is already turning 18 next month and will be followed by Sadie Sink (Max Mayfield) next April. The younger cast members include Finn Wolfhard (Mike Wheeler), who turns 17 in December, Brown turns 16 in February, and Schnapp will be 15 next month. They’re growing up so fast and it’s making us emotional!

Netflix hasn’t officially announced Stranger Things’ fourth season, but they better do it soon before the kids get too old! Also, we just want more Stranger Things. Is Chief Him Hopper (David Harbour) alive?! We need to know!

Currently, Hop’s fate in the series is unclear. The character is thought to be dead by his friends and family in Hawkins, but fans of the show aren’t buying it. Harbour has been leaning into his character’s supposed death, but we’re still not convinced. First and foremost, we didn’t see a body, which is pretty much the number one rule of television deaths. Second, the season’s post-credits scene saw a Russian soldier being told to feed a prisoner to their Demogorgon, but is ordered to spare “the American.” Some fans believe Harbour is also sending subtle hints on Instagram that Hop is the American. You can learn about the potential hidden meaning behind his profile photos here.

All three seasons of Stranger Things are now streaming on Netflix.