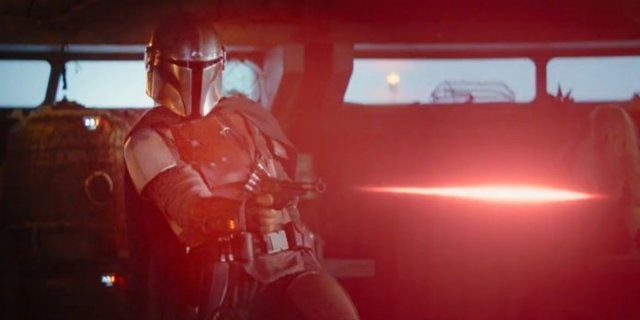 We’re only a few months out from The Mandalorian making its debut on Disney+, showcasing a whole new side of the Star Wars galaxy. It looks like the crew is busy putting the finishing touches on the series — and creating some pretty awesome art. Ludwig Goransson, who serves as a composer on the series, recently took to Instagram to share a behind-the-scenes look at the scoring session. The picture shows a blank page of sheet music covered in a drawing of The Mandalorian from Dave Filoni, who serves as a director and executive producer on the series.

This is just the latest Mandalorian drawing that a cast or crew member of the show has gotten, after series star Pedro Pascal shared one shortly after the series’ title was confirmed. In a way, the series marks a bit of new territory for Filoni, as it is the Clone Wars and Star Wars Rebels producer’s jump into live-action. And if comments from Filoni are any indication, it sounds like The Mandalorian will pave new ground in an interesting way.

“I’ve seen a lot of Star Wars,” Filoni shared in a previous interview. “And what’s most exciting to me is that I am very confident we did some things — and fans will see things — that have never been seen before.”

The Mandalorian will follow its titular bounty hunter (Pascal) as he travels the outer reaches of the lawless galaxy, surviving as a mercenary-for-hire. The cast of the series also includes Gina Carano, Carl Weathers, Taika Waititi, Giancarlo Esposito, Nick Nolte, Omid Abtahi, Emily Swallow, and Werner Herzog. Directors on the series will also include Waititi, Rick Famuyiwa, and Bryce Dallas Howard.

“For Star Wars, the question was how do we make it feel like Stars Wars, how can I tell a story set in this particular time…what’s this gritty world?” series creator Jon Favreau recently explained. “The original Star Wars movies were a bit more intimate, character-driven. In many ways, this follows the structure of a television show in that we don’t have an endless budget and it’s served by the scale of the original films which isn’t the big, huge blockbuster movies you see on the big screen all the time.”

The Mandalorian will premiere on November 12th on Disney+.

Justice League vs. The Fatal Five – “Legion Museum” (Exclusive)
Rurouni Kenshin Final Chapter Movies Postponed Due to COVID-19
Re:Zero Gets Spin-Off Game For Switch/PS4/PC!
DC’s Stargirl: Courtney Gets Her First Recruit in “Wildcat” Preview
Agents of SHIELD: All the Characters We Want to See Return in the Final Season