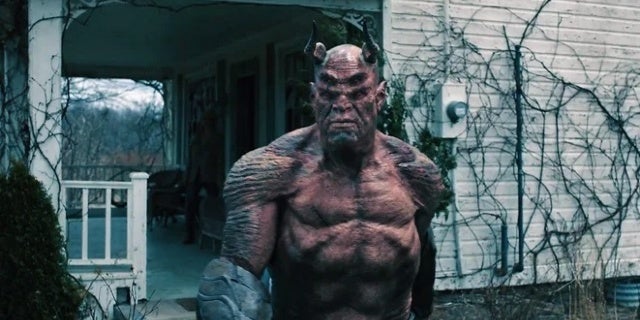 Titans finally returned to DC Universe last Friday, bringing fans the conclusion to the Trigon storyline that was expected back in the Season 1 finale late last year. The first season ended with a cliffhanger, showing Dick possessed by Trigon and preparing to do his bidding. The new premiere brought that arc to a close with a battle between Trigon and Raven, showing the popular villain in his popular demonic form for the first time.

As you would probably expect, the TV version of the Trigon demon was pretty divisive. He looked much better than anyone should’ve expected on a TV series budget, but some fans were instantly up in arms about some of his CGI features. There were folks who didn’t like his off-red color. Others were mad about his lack of white hair. Some people just weren’t into the CGI feel of his design. A few fans online even went so far as to redesign and edit the character in the Titans scene.

Then again, there were also plenty of people who liked the final version of Trigon, even though he wasn’t actually on screen for too long.

Everyone had their own feelings about Trigon’s new design, and they all took to Twitter to share with their opinions fellow fans.

Titans S2 is really good, a huge step up from S1 but a few things I don’t like;

Although I’m not super happy with how they did the Trigon storyline, I am very happy with his look. Hopefully later on they can bring him back and be more faithful to his story pic.twitter.com/HK5fqRwip1

😮 Trigon from DC Universe Titans, somebody said he looks better than Steppenwolf from Justice League 😂 pic.twitter.com/pfD7ebBTdG

some were hard to adjust cause of the type of “blueness” to it..the edited trigon one kinda reminds of MOS tho… pic.twitter.com/jMCYHrRWrj