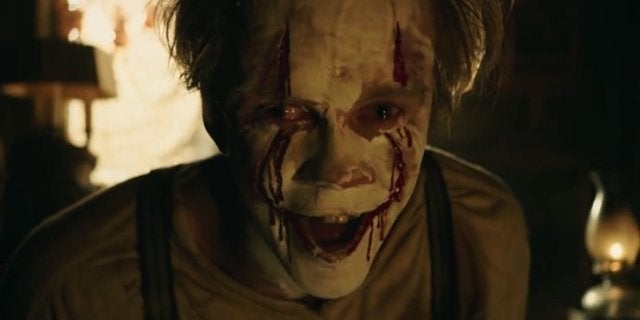 IT CHAPTER TWO finally hit theaters this weekend and follows everyone’s favorite kids from Derry as they return home 27 years after the events of IT to face the monster one more time. Of everything IT transforms into, its most used form is Pennywise, the clown portrayed by Bill Skarsgård. While the new movie wraps up the story without any loose ends, Skarsgård recently told Entertainment Weekly that he’d be up for returning to the role.

“It would have to be the right type of approach to it,” Skarsgård explained. “The book ends where the second movie ends, so that is the final chapter of this story. There is this interesting aspect of going back in time before all this happened. There might be a story there that might be worth exploring. Obviously that would be a story that’s not in the book, it would be a freestanding story, but obviously within the same universe. So, there might be something interesting out of it. I think it would be fun.”

While there is no source material to go off of, it wouldn’t be surprising if they chose to make an IT CHAPTER THREE considering the new film has already earned $91 million in domestic sales this weekend as well as $94 million overseas. While the movie didn’t earn as much as its predecessor, it’s still a big enough earner to warrant a follow-up.

So far, IT CHAPTER TWO has been met with mixed reviews, currently standing at 64% on Rotten Tomatoes (although, the audience score is 80%). Comicbook.com’s Brandon Davis sums it up succinctly in his IT CHAPTER TWO review – which you can read HERE, or watch in the video above.

“Every thread leads to a third act culminating a near three-hour movie with some spectacle that’s hard to stay too invested in or get scared by when you might find yourself checking your watch. The final moments are clouded with CGI and flashing lights which, for some, might come with scares while, for others, it ends up losing a bit of the terror.”

Would you like to see an IT CHAPTER THREE? Tell us in the comments!

IT CHAPTER TWO is now playing in theaters everywhere.