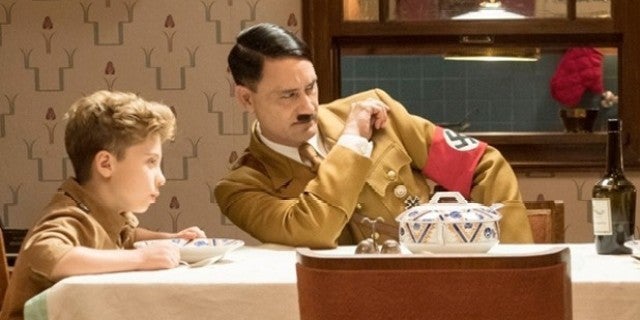 The next feature film from director Taika Waititi, anti-hate satire Jojo Rabbit, premiered this weekend at the Toronto International Film Festival. There’s a lot of love out there for the filmmaker as of late, thanks to his work on films like The Hunt for Wilderpeople and Thor: Ragnarok. In Jojo Rabbit, like in those other films, Waititi utilizes one of his most frequent actors in a scene-stealing role. Of course, we’re talking about the actor Taika Waititi.

Waititi has often appeared in his own films, both in bigger roles and smaller cameos. His priest in Wilderpeople provided one of the funniest bits in the entire film, while audiences quickly fell in love with his motion-capture rock warrior, Korg, in Ragnarok. Waititi takes on an even larger and more controversial role in Jojo Rabbit, playing dictator Adolf Hitler, who appears as an imaginary friend to the young boy at the center of the film.

Following the premiere of Jojo Rabbit on Sunday, Waititi spoke to Rotten Tomatoes about directing himself as an actor, and he offered his alter ego quite a bit of praise.

“I mean, he’s an incredible actor,” Waititi said of himself. “He’s a consummate professional. Sometimes he takes a lot of takes, and sometimes it takes him a little long to learn his lines. But if you ask Taika the actor to Taika the director, he’d say ‘A very generous director who will give that many takes.’ I think the two of them work together very well, they listen to each other and I think there’s just a mutual respect between them.”

For anyone who has been following Taika Waititi for any amount of time, this seems like the most on-brand response he probably could have given when asked about himself. His quirky style of comedy is on full display here, showing that he keeps the laughs coming long after the cameras stop rolling.