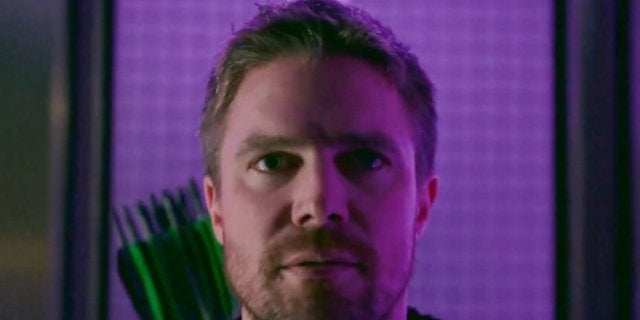 Stephen Amell has unintentionally started the first big “controversy” over the upcoming Arrowverse Crossover event “Crisis on Infinite Earths”. Thanks to a tweet from Amell, Arrowverse fans are now in a state of confusion about just how many episodes we’re getting in Arrow’s final season.

Originally, it was stated that Arrow‘s final season would have 10 episodes, and that’s what fans have been counting on all throughout season 8’s production. Now do the math the Stephen Amell lays out in his tweet:

So, that’s 9 episodes by Amell’s count, and not the 10 that were promised – so what’s the deal here? Well, it didn’t take Arrow fans long to barrage Amell with questions, and narrow things down to some various possibilities behind the tweet’s meaning:

The last two possibilities are the most interesting – especially the final one. It’s already been established that “Crisis” will involve Amell’s Oliver Queen having to lay down his life in order to help save the multiverse – as he promised The Monitor he would during the previous “Elseworlds” Arrowverse crossover. So while “Crisis on Infinite Earths” may in many ways be the culminating event of Arrow‘s run, it’s not crazy to think that Amell’s big ending to Oliver Queen’s story could come during the “Crisis” event, with the final episode Arrow examing the new status quos following Oliver’s departure.

That approach seems even more believable when you consider where Arrow has taken its story. Season 7 began a two-pronged flash-forward storyline, set in both present day Starling City and future Star City, after Olvier is long gone. So, an Arrow series finale could similarly examine how the characters of present day Team Arrow step up to carry on Oliver’s legacy, while the future storyline wraps up how Oliver and Felicity’s kids (William and Mia) build a new Team Arrow in the future. There have been rumors that Arrow could possibly be spun out into some kind of new series, and it woudl be in keeping with CW tradition to use the final episode of the series to launch something new.

What do you think Stephen Amell meant with his Arrow episode count tweet? Let us know in the comments!

Season eight of Arrow will premiere on October 15th at 9/8c on The CW.