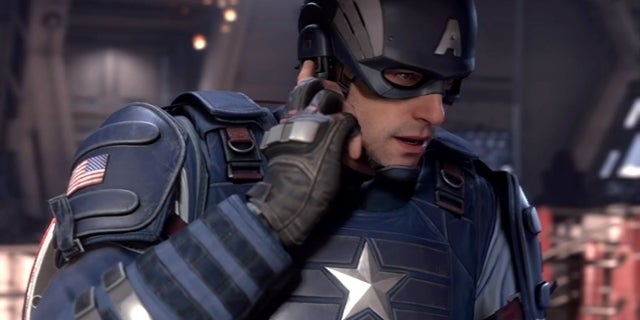 The creative director of the highly anticipated Marvel’s Avengers recently spoke about the upcoming game in a series of tweets that were sent out by the title’s official account. Not only did we get the best look at Captain America yet, but they also touched on a few of the design choices that went into the iconic character, including how Tony Stark himself has a hand in helping design the in-game suits in the adventure. That said, also included with the details from Tore Blystad was information about Captain America’s suit, shield, and more.

“Cap’s suit is based on modern combat gear,” reads the tweet. “Marvel DNA like the star, stripes, & shield are balanced with new elements such as the military name embroidery. The design is a balancing act that pulls from the past to create a modern adaptation of Jack Kirby’s original designs. The helmet is built from a strong, protective material & the wing design follows the shape of the helmet rather than extending as in the classic designs. Details like the chin strap makes it a practical and believable helmet to wear for a soldier.”

“The helmet is built from a strong, protective material & the wing design follows the shape of the helmet rather than extending as in the classic designs. Details like the chin strap makes it a practical and believable helmet to wear for a soldier.”

Blystad then went on to note how Captain America’s shield has also received a few changes. “The shield has gone through a moderate redesign based on the Marvel’s Avengers story,” they said. “As the Avengers expand to the West Coast and beyond, Cap needs a shield that represents their new role. The design was modified with a star that reaches further, out of the blue.”

Marvel’s Avengers is set to officially arrive on May 15, 2020 for Google Stadia, PC, PlayStation 4, and Xbox One. For even more on the upcoming title, check out some of our previous coverage as well as the brief description below:

“Marvel’s Avengers begins at A-Day, where Captain America, Iron Man, Hulk, Black Widow, and Thor are unveiling a hi-tech Avengers Headquarters in San Francisco — including the reveal of their own helicarrier powered by an experimental energy source. The celebration turns deadly when a catastrophic accident results in massive devastation. Blamed for the tragedy, the Avengers disband. Five years later, with all Super Heroes outlawed and the world in peril, the only hope is to reassemble Earth’s Mightiest Heroes.”

STEVE GEPPI Makes the Case for DIAMOND as Primary Direct Market Distributor in 2020
That Time I Got Reincarnated as a Slime Delays Season 2 and Spin-off
Logan: James Mangold Says He Never Thought Fox Would Allow This Tragic X-Men Reveal
The Day I Became a God to Star Sakura Ayane!
Higurashi When They Cry Anime Delays Premiere Due to COVID-19